A Utah police department has released body camera footage of an incident in February that culminated in a four-year-old child shooting at officers.

The father of the young child, Sadaat Johnson, 27, had brandished a gun at a McDonalds drive-thru in Midvale on February 21 after becoming outraged that his order was incorrect.

Workers at the fast food restaurant asked the man to pull to the front of the building claiming that they were correcting the order — after they alerted the police.

At approximately 1:30 p.m. the Unified Police Department responded to the scene and repeatedly ordered Johnson to step out of the vehicle. He refused to comply.

Johnson had his three-year-old and four-year-old children in the car during the incident.

“Officers approached the vehicle, issuing several verbal commands to the male to exit the vehicle, he did not cooperate,” the Unified Police Department said in a press release posted to their website. “Officers opened the vehicle door and pulled the male from the car. While taking the male into custody, an officer turned back toward the vehicle and saw a gun pointing out from the rear window. The officer vocalized to other officers there was a gun while swiping the gun to the side as a round was fired from the gun. The officer recognized the young age of the individual with the firearm and yelled out ‘kid’ to the other officers.”

The four-year-old child was the one who had fired. The police department said that information obtained during their investigation indicates that the father had told the child to shoot at the officers.

Both of the children could be heard crying in the footage as they were removed from the scene by the officers. The child said that he had fired the weapon because he “wanted his daddy back.”

Sheriff Rosie Rivera said at the time, “This is a sad day for law enforcement and our community. To have an adult think it is okay to encourage a four-year-old to pull a firearm and shoot at police illustrates how out of hand the campaign against police has gotten. This needs to stop and we need to come together as a community to find solutions to the challenges we face in our neighborhoods. Officers are here to protect and serve and we are beyond belief that something like could happen.”

One officer received minor injury to his arm, there were no other injuries.

In March, Johnson was charged with child abuse, aggravated assault, and interference with an arresting officer. 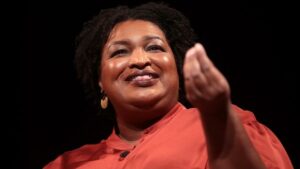 Nearly All of Stacey Abrams’ Campaign Donors Are Out-of-State