Nearly All of Stacey Abrams’ Campaign Donors Are Out-of-State

Just 14% of donors are Georgia Residents

Democrat Stacey Abrams, a candidate in one of the most intense gubernatorial contests in the nation, is funding her campaign through a large amount of out-of-state donations.

That year, both candidates raised more than $56 million, setting a state record for gubernatorial fundraising. In the reporting period closest to the election, Abrams had raised $22.1 million, and only about $4.2 million in campaign contributions to Abrams were from out-of-state donors.

However, for her second attempt to take up residence in the governor’s mansion, the Abrams campaign is bankrolled by out-of-state money, with 86 percent of the $49.6 million she’s raised coming from non-Georgia residents.

The Kemp campaign, by contrast, has received 83 percent of its $31.5 million in donations from within the state since they began fundraising in 2019.

“It is telling that Georgia residents, who know Stacey Abrams, are not willing to invest in another failed campaign filled with policies that do not align with their own,” Paris Dennard, National Spokesperson & Director of Black Media Affairs for the Republican National Committee (RNC), told Timcast.

“Stacey Abrams’ outside of Georgia fundraising campaign tells Georgians she’s more focused on running a national campaign to appeal for her future ambitions than really connect with Georgia voters who already don’t trust her,” he added.

Nationwide, the 2022 elections are shaping up to be historically expensive, with four of the most competitive races receiving more than 75 percent of their campaign funds from out-of-state donors.

In Georgia, if Abrams’ fundraising trend continues, she will be the only gubernatorial candidate since the 1990s to receive a majority of campaign funds from outside the state, according to Axios.

Though the campaign has come under fire for having only 14 percent of its funds coming from Georgia residents, Abrams staffers take pride in having more individual donors than other candidates in the race.

“Even after Brian Kemp and his right-wing allies rigged our campaign finance laws to give himself unlimited money, our grassroots supporters have fueled our campaign from every corner of the state,” said Alex Floyd, a spokesman for the Abrams campaign.

But, Republicans note that even despite 40-year high inflation and record gas prices, it’s a good sign that in-state donors have parted with more of their money in support of Kemp.

“It is abundantly clear that the leadership, policies and commitment to all Georgia residents Governor Kemp has shown sends a message that Georgians are willing to invest in him for another term, with him receiving $24 million dollars more than Stacey Abrams from local donors,” Dennard said.

As of July 14, polling data of likely voters showed Kemp held a 14-point lead over Abrams. 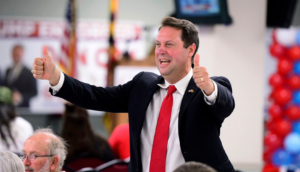