A self-described “millionaire” from Utah has been arrested after he allegedly kidnapped a woman and held her captive in his home for several weeks.

Ramone Marcio Martinez, 39, of Salt Lake City, allegedly carved the number “6” into her hand to signify that she had six months to “love him or be killed.”

The victim, who has not been publicly identified, said that he assaulted her multiple times and threatened to harm her family members.

Police found the woman on Wednesday after she sent a single desperate text to a friend, letting him know that she was being held captive.

“The victim had texted him begging for help and that she was scared for her life,” according to a police booking affidavit obtained by local station KSL.

In an affidavit written by one of the arresting officers, they said that Martinez “had his hand in his hoodie pocket and I could see the outline of a handgun which he was holding onto. I ordered him to put his hands in the air and he complied.”

The victim said that she had been assaulted six times on Tuesday alone.

Additionally, the officer’s affidavit says that the victim “had heavy bruising around both eyes and she stated her ribs were hurting and that she had difficulty breathing. She stated that over a period of several weeks she was threatened to be killed and was assaulted. During this time she was unable to leave or go anywhere freely.”

She said that she was repeatedly choked to the point of losing consciousness and urinating on herself. She also detailed having bruises on her face from being beat with a belt.

According to his LinkedIn profile, Martinez is the CEO of Truu Med, a medical cannabis doctor referral service that links patients to doctors who are willing to prescribe them marijuana.

Police have recommended that he be held without bail due to his access to large amounts of money and weapons. 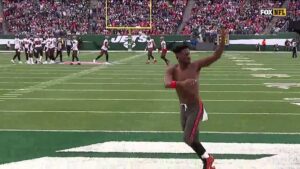