Now popular Christian conservative rapper Bryson Gray has stepped in with a remix.

Paulson’s original video was met with a mix of mockery and praise for the wholesome nature of her efforts.

“My name is Linda Paulson, Republican and awesome,” Paulson raps. “Love God and family and the constitution.”

Paulson raps, “I tried to get another conservative to run. Nobody could do it. So I’m getting it done.”

The video was originally posted to her YouTube channel, where it has amassed over 125,000 views — but copies of it have been posted and went viral on seemingly every other social media platform.

Paulson’s video continues, “Just to clarify… as a female adult, I know what a woman is.”

“If you share my values, if you like what I stand for, then give me your vote on the 8th of November,” Paulson continued. “District 12 needs a choice. Let me be your voice.”

On Twitter, the video has amassed millions of views.

republicans have gone absolutely off the rails because what is this LMFAO pic.twitter.com/jX2SBjJ0bF

It was even picked up by Stephen Colbert’s The Late Show.

Christina Pushaw, Rapid Response Director for Florida Governor Ron DeSantis tweeted, “Aww this is cute. She seems like a nice lady. I’d vote for her if I lived there.”

Aww this is cute. She seems like a nice lady. I’d vote for her if I lived there.

As people bickered about whether the video was terrible or amazing, Gray quickly moved to help Paulson out by releasing his surprise collaboration.

The video begins with Gray watching her video, then asserting, “Linda, I got you.”

“If you vote for Linda, District 12 gon’ be boomin. So, vote Linda Paulson. Why you stallin’? She gon’ have Utah ballin’,” Gray says in his rap.

Gray is best known for his own viral songs, which include Trump is Your President, Gun Totin’ Patriot, and Maga Steppin’.

Timcast asked Gray if Paulson had reached out to him about the remix, but she hasn’t yet.

“I didn’t do it for that reason. I did it to fight back,” Gray said. “It’s a culture war and she was just having fun. Instead of allowing the trolls to win we need to fight back. Seems like everyone loves it so far.” 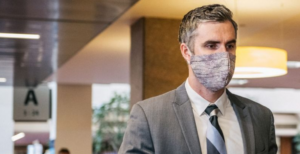