Utah Gov. Spencer J. Cox has signed an executive order prohibiting use of the social media app TikTok on all state-owned electronic devices, joining eight other states that have issued similar rules.

The announcement comes nearly a month after FBI Director Christoper Wray testified before Congress about national security concerns surrounding the app, warning that the Chinese government “could use it to control data collection on millions of users, or control the recommendation algorithm which could be used for influence operations if they so choose, or to control software on millions of devices.”

“China’s access to data collected by TikTok presents a threat to our cybersecurity,” Cox said in a press release. “As a result, we’ve deleted our TikTok account and ordered the same on all state-owned devices. We must protect Utahns and make sure that the people of Utah can trust the state’s security systems.”

The executive order also applies to accessing a TikTok website, as well as prohibits any agency from sponsoring content on TikTok. It also tasks the state’s Department of Government Operations with investigating any additional vulnerabilities TikTok presents, and making recommendations to the governor and agencies to address vulnerabilities.

The app also collects the content of messages and information about when messages are sent, received and/or read. “In aggregate, TikTok’s data collection is more intrusive than other apps,” according to the Center for Internet Security.

Brendan Carr, one of five commissioners at the Federal Communications Commission (FCC), has recommended that the U.S. government federally ban TikTok. 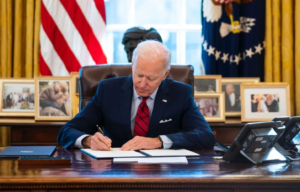