Carli Lloyd broke ranks with her teammates on Thursday and stood prior to her team’s match against Australia.

The match determined who would take third place at the Tokyo Olympics. In addition to Lloyd, the Australian team all stood while US players, coaches, staff and referee knelt on the field.

ALL the USWNT players and staff knelt. All except Carli Lloyd. To say Lloyd is a "somebody" on the team is an understatement.

Also surprised to see Australia didn't kneel and are actually standing in solidarity opposite the U.S.

Not sure what's going on here. But interesting. pic.twitter.com/7RPab0IWn1

According to Fox News, Lloyd “became the first U.S. women’s soccer player to score in four different Olympics. It was the 10th Olympic goal for Lloyd, breaking a record previously held by Abby Wambach.”

In a press conference in January, Lloyd said the beauty of her team was that they “stand behind each other no matter what.”

Here is Carli Lloyd's explanation for standing during the national anthem before yesterday's #USWNT game against Colombia. Shout out to @thegoalkeeper for asking the question: pic.twitter.com/u6uaejPu3A

National and Olympic soccer player Megan Rapinoe began kneeling before games in February 2017 to show solidarity with NFL player Colin Kaepernick. The U.S. Soccer Federation issued a ban against kneeling for the anthem that was later repealed following international protests against racism and police brutality, notes the Orlando Sentinel.

“Lloyd has consistently found herself in the minority among the team on the issue of kneeling. US players knelt as the national anthem played ahead of various scrimmages in 2020 and earlier this year. But Lloyd never joined her teammates, opting to stand with her hand on her heart,” reports Business Insider.

At the Tokyo Olympics, the US women’s soccer players stood during the national anthem but knelt just before kickoff. Lloyd was the outlier who didn’t kneel prior to kickoff.

“Players kneeling ahead of Olympic contests has been a common sight since the Games began after the International Olympic Committee relaxed its rules on athlete demonstrations,” per the New York Post.

The match is speculated to be the 39-year-old’s last international competition. Team USA beat Australia 4-3 to take the Olympic bronze medal. 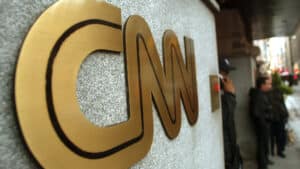 VAX or AX: CNN Fires Three Employees For ‘Going to the Office Unvaccinated’