The US government has renamed five more sites that had the word “squaw” in their names.

“Squaw” is said to be a racist term for a female Native American person, but comes from the Algonquin language and originally just meant “woman.”

The U.S. Department of the Interior announced the name changes to sites in California, North Dakota, Tennessee, and Texas on Thursday.

“Words matter, particularly in our work to ensure our nation’s public lands and waters are accessible and welcoming to people of all backgrounds,” Interior Secretary Deb Haaland said in a statement about the name changes. “I am grateful to the members of the Derogatory Geographic Names Task Force and the Board on Geographic Names for their efforts to finalize the removal of this harmful word. Together, we are showing why representation matters and charting a path for an inclusive America.”

Over 650 sites using the word have already been renamed.

Haaland took office in 2021 and is a Native American woman. Upon taking office, she quickly declared that the term is derogatory and ordered the Board on Geographic Names to start renaming sites using the word.

One of the sites, Squaw Gap in North Dakota, has been renamed Homesteaders Gap — but the decision has been controversial.

NBC News reports, “Joel Brown, a member of the McKenzie County Board of Commissioners, said many residents in the area ‘felt very strongly’ in opposition to the switch. Brown, who is white, said he and others prefer as little interference from the federal government as possible because ‘generally we find they’re disconnected from what the culture and economy are out here.'”

Keene-area farmer/rancher Kathy Skarda, who grew up in Squaw Gap, told the Bismarck Tribune that she doesn’t think the original name was “ever meant to be derogatory toward anybody or any ethnicity.”

The newspaper noted that the name Squaw Gap came from “a local rock formation said to resemble an Indian squaw carrying a papoose, and its location in a gap in a hill,” citing “North Dakota Place Names” by Douglas A. Wick.’

Mark Fox, tribal chairman of the Mandan, Hidatsa, and Arikara Nation, celebrated the name change and told the Tribune that the word “really causes serious and strong emotions and resistance to that term.” He told the Associated Press that “we are pleased that the racially insensitive and offensive name has been removed.” 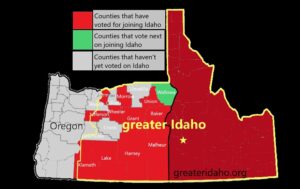