Border patrol encounters in mid-2022 is quickly approaching the 2021 fiscal year total of over 1.6 million

The United States Border Patrol reported apprehending more than 239,000 people attempting to cross the border illegally in May.

A new report indicates that there were 239,416 encounters on the nation’s southwest land border in May. The total indicates a 2% increase in encounters from the month prior.

The arrest total surpassed the previous arrest record that was recorded in March of 2000 during President Bill Clinton’s administration, per CBS News.

“Of those, 25 percent involved individuals who had at least one prior encounter in the previous 12 months, compared to an average one-year re-encounter rate of 15 percent for FY2014-2019,” the agency said in a press release.

The majority (69%) of those individuals attempting to illegally enter the country were single adults.

“Current restrictions at the U.S. border have not changed: single adults and families encountered at the Southwest Border will continue to be expelled, where appropriate, under Title 42,” said CBP Commissioner Chris Magnus.

President Joe Biden’s administration had announced in April that it would end Title 42, which was enacted following the global outbreak of COVID-19.

“The Biden-Harris Administration is committed to pursuing every avenue within our authority to secure our borders, enforce our laws, and stay true to our values,” said Secretary of Homeland Security Alejandro Mayorkas in a statement. “Yet a long-term solution can only come from comprehensive legislation that brings lasting reform to a fundamentally broken system.”

A federal judge issued an injunction, blocking the Center for Disease Control and Prevention from ending the public health order, in late May.

“As temperatures start to rise in the summer, human smugglers will continue to exploit vulnerable populations and recklessly endanger the lives of migrants for financial gain,” Magnus added. “The terrain along the Southwest Border is extreme, the summer heat is severe, and the miles of desert that migrants must hike after crossing the border are unforgiving. Our message to those who would try and gain illegal entry to the United States remains the same – don’t make the dangerous journey only to be sent back.”

CBP has conducted just over 14,200 search and rescue missions during 2022.

In the report, the agency noted it has been able to “interdict the flow of illicit narcotics across the border” leading to an average 22% decrease in drug seizures nationwide.

According to The Hill, the majority of illegal immigrants were of Mexican origin and the number of Haitian migrants seeking to enter the United States increased in May.

The outlet also reported the number of Ukrainian migrants fell from 20,118 in April to 375 in May. 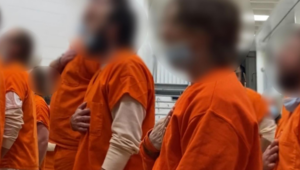