According to a report released by Representative Marjorie Taylor Greene (R-Ga.), a visit she took to assess the conditions in the D.C. jail housing 40 detainees awaiting trial for their involvement in the Jan. 6 Capitol riot revealed widespread human and civil rights abuses.

Representatives Greene and Louie Gohmert (R-Texas) toured the D.C. Department of Corrections central detention facility and central treatment facility on Nov. 4 after what the congresswoman describes as the culmination of “months of persistence.”

The central detention facility became the subject of an investigation by the U.S. Marshals Service. Their findings, which came just days before Greene and Gohmert toured the facility, stated that 400 prisoners would need to be relocated due to poor conditions that failed to meet the “minimum standards of confinement.”

According to her report, “pre-trial inmates related to January 6 are treated more harshly than any other inmates in the D.C. jail, even though they have yet to be convicted of any crime.” Other inmates who have been convicted are given access to television, legal lessons, and educational opportunities.

During a leg of the tour unrelated to the Capitol riots, one staffer from Greene’s office discovered that inmates were given access to books detailing critical legal studies and critical race theory. After observing this material, Representative Greene said it “remains difficult to resist the conclusion that DOC staff support the dissemination of racist and anti-American propaganda to inmates, whether in the form of Nation of Islam newspapers, Critical Race Theory articles, or academic studies teaching young inmates that the United States perpetuates a racial caste system.”

Greene and other Republican representatives were previously denied entry on July 29 and Nov. 3 — with Representatives Greene and Matt Gaetz (R-Fla.) being accused of trespassing by Deputy Warden Kathleen Landerkin during one of those visits. When access was finally granted, the Republican legislators were given just 15 minutes of notice and told they could accompany D.C. city council members on their tour of the facilities.

Once inside the facility, the Department of Corrections attempted to prevent Greene and Gohmert from accessing the area where Jan. 6 detainees were being held. It was only after Gohmert threatened to take the issue to a U.S. judge that the department director relented.

While questioning January 6 inmates, Greene was told that they had a considerable number of grievances, including that they were:

According to the report, at least one inmate continues to suffer from a serious, yet untreated, injury:

One elderly inmate, 71-year-old Lonnie Leroy Coffman, was in such poor condition that his lower forearm had turned purple and his thumb, black. Inmates claimed Lonnie could be in danger of losing his lower arm and has been denied medical treatment. Multiple inmates argued that if there were a way to get any inmate released, it should be Lonnie.

Inmates also charge the correctional facility and its officers with seeking reprisals for actions taken by those who have demonstrated support for the detainees. On Sept. 18, a crowd gathered near the Capitol to protest for the release of “political prisoners” from the D.C. jail. That morning, according to inmates, guards initiated a program of psychological abuse.

The detainees were allegedly marched out of their cells at dawn and told only to bring their mattresses. On the way to the undisclosed location that inmates soon realized would be their home for the next 9 hours, the Jan. 6 participants began singing the national anthem. One of the men claimed that an officer “punched [him] in the gut” as “retaliation.”

A second man corroborated his story.

According to the report, the inmates were deprived of water and bathrooms from 8:00 a.m. to 6:00 p.m. that day.

“The sad, but unsurprising, reality of the D.C. jail reveals that the primary programming goal was centered around access to voting and anti-American propaganda,” Greene concluded. “If the preponderance of evidence is any indicator, it seems more likely that the jail staff was more concerned with inmates voting and understanding that America is racist than ensuring basic healthcare, diet, and civil liberties are preserved.” 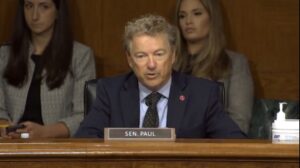 Dr. Fauci Admits Vaccine Approval Committee Members Do Not Have to Disclose Kickbacks From Manufacturers During Fiery Exchange With Sen. Paul