New York Assemblyman Nick Perry will retract a law he proposed that would mandate people with communicable diseases to be removed and detained.

The legislation, A416, states anyone with an illness — or anyone who could be considered a contact, carrier or “suspected case” — could be deemed “a danger to public health” by the Governor and forced into a medical facility or other “appropriate facility.”

After the legislation received a wave of backlash on social media — particularly on TikTok — the lawmaker who authored the bill announced the legislation will be removed.

“Conspiracy theorists, and those who spread misinformation online are once again trolling on social media, posting concocted stories about A.416,” Perry wrote in a statement posted to Twitter on Dec. 20.

“To deprive these individuals the ability to use this issue for fuel to spread their fire of lies and mistruths, I will take the appropriate legislative action to strike the bill, remove it from the calendar, thus ending all consideration, and actions that could lead to passage into law.”

He concluded: “Get vaccinated and stay safe.”

Over the weekend, at AmericaFest, Representative Marjorie Taylor Greene claimed the bill had already been passed by the House of Representatives in New York.

“New York, in the House, they just passed a bill, it’s going to the Senate next week, where anyone’s that’s unvaccinated that is to be a dangerous person to society, and be a threat to public health, can be detained indefinitely,” Greene stated. “Things are getting to places we shouldn’t be. … I have a serious problem with that because I’m not vaccinated. And they’re going to have a hell of a time if they wanna hold me down and give me a vaccine.”

Before Perry’s withdrawal, the bill was in committee and had not been review by the House or the Senate.

However, it is worth noting that the language of the legislation granted the governor power to “require an individual who has been exposed to or infected by a contagious disease to complete an appropriate, prescribed course of treatment, preventative medication or vaccination.”

The latest version of this bill, which was most recently proposed for the 2021-2022 legislative session, was denounced by the Libertarian Party of New York in December of 2020.

“This bill offers a clear and direct path to unconstitutional and indefinite detainment, on the governor’s sole authority,” said Cody Anderson, chair of the Libertarian Party of New York, in a statement. “No US state was ever meant to have a single person acting as judge and jury, without checks or balances; if this bill is allowed to pass, that is exactly what New York will have.”

Editor’s Note: A previous version of this article stated that A416 was first introduced in 2021, when in fact a prior version, A680, had been introduced during the 2017-2018 legislative session. The article has been updated to address this fact. 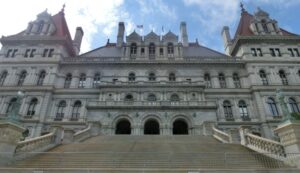