A wave of new public health laws that greatly expand inoculation-related policies has been proposed in New York.

The five bills, which are currently in committee ahead of the next legislative session, are designed to increase vaccination rates across the states. Some bills would mandate vaccines in schools and daycares. Another would make vaccinations a requirement for those in college.

Another would allow the detention of people infected or possibly exposed to illness if they are deemed to be a threat to public health by the governor and health commissioner.

One lawmaker has proposed getting rid of religious exemption to vaccines, permitting only medical exemptions for all age groups.

If delivered to the governor’s desk and signed, the requirements would be some of the strictest inoculation laws in the nation.

Four of the five proposed bills were sponsored by Assemblyman Jeffery Dinowitz, who represents District 81 in the Bronx

Dinowitz sponsored Assembly Bill A8378, which makes the COVID-19 vaccination a requirement to attend school in the state of New York for any child between the ages of two months and 18 years old.

Dinowitz and his co-sponsors, Assemblymen Phil Steck and Richard Gottfried, want to add COVID-19 to a list of diseases that parents or legal guardians are required to inoculate their children against. The list includes mumps, measles, diphtheria, tetanus, pneumococcal disease and hepatitis B, among others.

Students have 14 days to provide proof of vaccination against the specified illnesses, including COVID-19, before school administrators are required to deny them admittance to school.

This period can be extended to 30 days for students transferring from another state or country if their parents, guardian, or caretaker “show a good faith effort to get the necessary certification or other evidence of immunization.” It appears that proof of one dose of an immunization or “age appropriate appointments scheduled to complete the immunization” would constitute a “good faith effort.”

If a child is denied entrance, parents must go through an appeals process reviewed by the commissioner of education.

The requirement would be considered inapplicable if a New York State licensed doctor says the immunization “may be detrimental to a child’s health.”

When an unvaccinated child is denied access to a school, Assembly Bill A8378 requires administrators to file a report — including the child’s name and address — to the parent and the local health authority.

Schools will also be required to supply the health commissioner with annual reports of which families have complied with the vaccine requirements:

“In the event that such person does not wish to select a health practitioner to administer the immunization, he or she shall be provided with a form which shall give notice that as a prerequisite to processing the application for admission to, or for continued attendance at, the school such person shall  state a valid reason for withholding consent or consent shall be given for immunization to be administered by a health officer in the public employ, or by a school physician or nurse.”

Dinowitz is also the force behind Assembly Bill A2240, which aims to increase flu vaccination among young children.

Parents in New York who are sending their kids to a daycare home, program or facility would be required to get their children vaccinated for the flu.

Parents who do not want to give their kids the flu vaccine have to fill out a form giving “a valid reason for withholding consent. Without it, ”a health officer in the public employ, or … a school physician or nurse” will be allowed to give consent for an unvaccinated child to get the flu shot.

Just like under Assembly Bill A8378, school administrators have two weeks to secure proof of inoculation before they must deny admittance to an unvaccinated child.

Similarly, Dinowitz sponsored Assembly Bill A7829, which would require students attending a college to be vaccinated against measles, mumps, rubella, and COVID-19.

This applies to anyone born after Jan. 1, 1957 who attends college in either a full-time or part-time capacity.

According to the bill, the requirement would go into effect 30 days after the Food and Drug Administration approves a biological license for a COVID-19 vaccine.

The legislation bans local governments, school boards, and employers from allowing anything but a medical exemption from vaccination mandates.

“Any provision of a law, rule, regulation, or policy adopted by any entity that allows for a non-medical exemption to an immunization requirement shall be deemed null and void,” the bill says.

The Autism Action Network denounced the bill, saying it violated the “reasonable accommodation” clause stipulated in the Civil Rights act of 1964. The group noted that Dinowitz referred to religious beliefs that conflict with his policy as “utter garbage” in a statement on his Facebook page.

Dinowitz called the organization “anti-vaxxers” who were “ignorant of both science and history” in a response on Twitter.

Once again, anti-vaxxers show their ignorance of both science and history.

John Gilmore's effort to co-opt the Civil Rights movement and MLK's "I Have A Dream" speech in the name of anti-vaxxers is disgusting and reprehensible. pic.twitter.com/bJCwl6FZ8c

In addition to his own proposals, Dinowitz is co-sponsoring Assembly Bill A279A, which is sponsored by Assemblyman Richard Gottfried.

If passed, this bill would require all health care providers to report all immunizations administered to anyone over the age of 19 in New York City to the department of health or to a regional health information organization.

The vaccinated person must object in order to prevent the information from being collected by the government.

Nurses and pharmacists would have two weeks to report vaccinations to the state.

Gottfried has served as the Assembly Health Committee Chair since 1987. He announced earlier this month that he would not seek re-election in November 2022.

“Gottfried is widely considered one of America’s leading state policymakers. The sponsor of over 500 laws, his influence has helped make New York State one of the most progressive states in the country,” his office said in the announcement.

“Assemblymember Dick Gottfried has served his district and our state with dedication, tenacity, and care, and I am grateful for his service to New Yorkers,” Governor Kathy Hochul said at the time. “As Chair of the Health Committee, Assemblymember Gottfried advocated for increased access and compassion in our health care system, especially for the most vulnerable New Yorkers. The impact of the laws he authored and of his leadership will be felt by New Yorkers for generations.”

Assemblyman N. Nick Perry of Brooklyn’s District 58 proposed the “removal and detention” of anyone with a communicable disease that warrants the New York Governor to declare a state of health emergency due to an epidemic.

Anyone with the illness, or anyone who could be considered a contact or carrier, could be deemed “a danger to public health,” according to Perry’s bill.

In the event that a case, contact or carrier — even a “suspected case” — “may pose an imminent and significant threat to the public health resulting in severe morbidity or high mortality,” the governor and official named as a delegate “may order the removal and/or detention of such a person or of a group of such persons by issuing a single order.”

The person or group would be identified “by name or by reasonably specific description.”

A copy of the order must be given to those detained or “posted in a conspicuous place in the detention premises” if it applies to a group.

New York residents who are confirmed or suspected of having the disease will be held at “a medical facility or appropriate facility or premises designated by the Governor.”

Those detained have the right to request a release from the facilities and to be represented by legal counsel. While access to legal counsel upon request is protected under the bill, that access “will be facilitated to the extent feasible under circumstances.”

Detained people are allowed to provide contact information for a “reasonable number” of their friends and family to the department, so the state can notify them of the person’s removal to a designated facility “to the extent feasible.”

Within 60 days of the start detention, the governor and his or her delegee have to obtain a court order authorizing the detention. Within 90 days, a court must review the detention, which cannot continue for more than five business days after a request for release has been made.

In addition to the governor, the orders could be issued by the health commissioner or heads of local health departments.

Perry’s bill also grants the governor “or his or her delegee” the power — “at his or her discretion” — to “issue and seek enforcement of any other order that he or she determines are necessary or appropriate to prevent dissemination or transmission of contagious diseases or illnesses that may pose a threat to the public health.”

Under this broad provision, the governor or appointed health officials would require individuals to isolate or quarantine, to be tested or medically examined or submit to “an appropriate, prescribed course of treatment, preventative medication or vaccination”

The latest version of this bill, which was most recently proposed for the 2021-2022 legislative session, was denounced by the Libertarian Party of New York in December of 2020.

“This bill offers a clear and direct path to unconstitutional and indefinite detainment, on the governor’s sole authority,” said Cody Anderson, chair of the Libertarian Party of New York, in a statement. “No US state was ever meant to have a single person acting as judge and jury, without checks or balances; if this bill is allowed to pass, that is exactly what New York will have.”

Perry was nominated to serve as President Biden’s ambassador to Jamaica in November. A Jamaica native, the assemblyman came to the United State in the 19070s. He has accepted the nomination and is waiting for Senate confirmation.

In the state senate, legislation has been proposed that would allow children ages 14 years and older to get vaccinated without parental consent.

Democrat Senator Liz Kreuger has sponsored Senate Bill S3041, which would “allow minors who are at least fourteen years of age to have certain vaccinations administered to him or herself” without their parents’ knowledge or consent.

“In January of 2019, the World Health Organization (WHO) listed the anti-vaccination movement to be one of the top ten threats to global health,” Kreuger wrote, noting that there were 650 reported cases of measles in New York that year.

She also cited a 2019 case of two students in Orchard Park, New York being denied access to school because their parents did not comply with the vaccine requirements.

Finally, the state senator argue that minors in six other states and Washington D.C. could consent to vaccines under the “mature minor doctrine.”

With the support of 5 co-sponsors, Kreuger has proposed her legislation to take immediate effect.

According to the Department of Health, about 71% of the state’s total population is vaccinated against COVID-19, with 82% of those over the age of 18 fully vaccinated. That totals over 12.6 million vaccinated people in New York.

Editor’s Note: A previous version of this article stated that A416 was first introduced in 2021, when in fact a prior version, A680, had been introduced during the 2017-2018 legislative session. The article has been updated to address this fact. 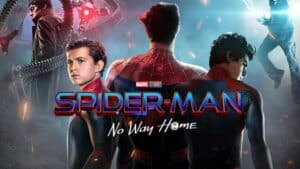 'Spider-Man: No Way Home' is the Second Largest Movie Opening in History