Over 5,000 tons of foods were stolen over the course of the attacks

The United Nation food agency stopped its work in part of Sudan after its warehouses were repeatedly attacked in recent weeks.

The UN food agency said in a statement that over 5,000 tons of food were stolen after its three warehouses were attacked and looted. All of the warehouses were in the province of North Darfur.

“This theft has robbed nearly two million people of the food and nutrition support they so desperately need,” said World Food Program Executive Director David Beasley. “Not only is this a tremendous setback to our operations across the country, but it endangers our staff and jeopardizes our ability to meet the needs of the most vulnerable families.”

In a Dec. 28 statement, the Humanitarian Coordinator in Sudan, Khardiata Lo N’diaye, condemned the looting and stressed the urgency of the WFP’s work.

“We are grateful to the local authorities for intervening and preventing the situation from worsening. However, we call upon the Government of Sudan to step up efforts to protect and safeguard humanitarian premises and assets throughout Sudan,” she concluded

An unidentified group had led an armed attack on a warehouse in the province’s capital, el-Fasher, earlier in the week. This prompted local authorities to impose a curfew but the attacks continued.

Not only did hundreds of looters steal the W.F.P.’s supplies but they also dismantled the warehouse structures.

The agency said that diverting assistance from other areas of Sudan would compromise the needs of people in other parts of the nation.

“On Thursday, the country’s state-run news agency reported that a number of suspects were arrested in el-Fasher after they were seen riding trucks and animal-drawn carts loaded with food stocks that were allegedly stolen from the WFP warehouses,” reports AP News.  “SUNA news agency did not say how many were arrested.”

The agency’s announcement follows months of political turmoil that was sparked by a military coup on Oct. 25. Nationwide protests challenging the military rule has led to violence, with more than 50 people killed by security forces.

Sudan is one of the poorest nations in the world. Between 11 million and 14.3 million people are estimated to be in need of humanitarian assistance. 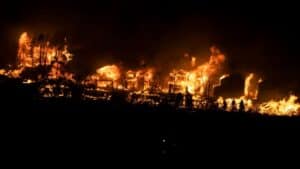