The blaze has destroyed entire neighborhoods, shopping centers and thousands of acres of land as fires rage across the Colorado county

Thirty-five thousand people from the towns of Superior and Louisville were evacuated on Thursday as wildfires destroyed nearly 600 homes in Boulder County, Colorado.

According to the Boulder Emergency Operations Center, the Marshall fire has burned roughly 1,600 acres by late Thursday. The state agency tracks the updates, efforts and impact of the wildfires currently affecting the area.

The fire had already destroyed at least 370 homes in the Sagamore area, 210 homes in Old Town Superior and several businesses, including an Element hotel and a Target store, according to reports Thursday.

There have been no reported deaths due to the wildfires so far. Boulder County Sheriff Joe Pelle said he “would not be surprised” if the blaze killed people.

“I’ve never seen anything like it, and we’ve had a lot of fires,” Pelle said. “This is a horrific event.”

According to initial estimates by Colorado officials, the Marshall fire appears to be the most destructive wildfire in Colorado’s history. The previous record is held by the Black Forest Fire, which destroyed 486 homes in 2013.

This week’s fire prompted Gov. Jared Polis to declare a state of emergency on Thursday. The governor’s declaration gives the state access to emergency funds, the Colorado National Guard, the Colorado Division of Fire Prevention and Control and the State Emergency Operations Center.

“Gusts of 100, 110 mph can and have moved this fire down a football field in a matter of seconds,” Polis said. “1,600 acres near a population center can be, and in this case is, absolutely devastating.”

Officials who help in emergency efforts could not fly state helicopters and planes all day because of wind conditions.

Firefighters on Thursday night were trying their best to preserve homes in the line of a fast-moving wildfire.

Colorado University’s football coach, Mark Smith, was among those whose homes had been destroyed.

“Just got word that every material possession we had today is now gone,” Smith tweeted.

Just got word that every material possession we had today is now gone. Our home, cars, and everything we had in our home lost to the fires that ripped through our community. Thank you to those who reached out. Processing how to completely start over and grateful for our health. 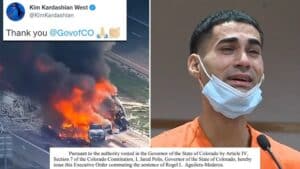