UK Vegans Could Be Exempt from Compulsory COVID-19 Vaccine

Vegans may be exempt from any mandatory workplace vaccination requirements because of the ethical components of their lifestyle.

Vegans believe they must follow a lifestyle that avoids “all forms of exploitation of, and cruelty to, animals for food, clothing or any other purpose; and by extension, promotes the development and use of animal-free alternatives for the benefit of humans, animals, and the environment,” per Sentiment Media.

Although all COVID-19 vaccines are not made with chimpanzee cells, fetal tissues, animal products, or eggs, all vaccinations are tested on animals. The debate regarding this issue has the vegan community divided.

A spokesman for law firm Lewis Silkin told the Telegraph: “Some ethical vegans may disagree with vaccinations on the basis that they will inevitably have been tested on animals … Ethical veganism has previously been found to amount to a belief, capable of being protected.”

Some vegan organizations have encouraged vaccinations, noting that “it is not always possible or practicable for vegans to avoid participating in animal use.”

“It has never been more important for us to talk about the definition of veganism in the context of medications, including vaccines,” a spokesman for The Vegan Society said to The Evening Standard. “In the case of Covid-19, vaccination will play a fundamental role in tackling the pandemic and saving lives. As there is currently a legal requirement that all vaccines are tested on animals, at this point in time it is impossible to have a vaccine that has been created without animal use.”

Express reports that an estimated 500,000 Brits do not consume animal products and believe in ethical veganism.

Currently, the government only requires home care workers to be vaccinated. Major companies like Netflix and Google have announced workers in the U.S. must be fully vaccinated in order to return to work — indicating the possibility more companies will follow suit. 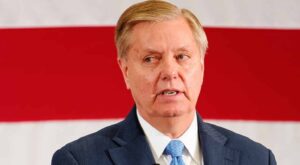 Sen. Lindsey Graham Has Tested Positive for Coronavirus, Despite Being Fully Vaccinated