'Whilst Passing Uses Of These Phrases Might Not Be Considered Misconduct, The Importance Of Challenging Their Use Cannot Be Overstated'

The United Kingdom’s Ministry of Justice (MOJ) staff members reportedly received emails containing a list of terms to avoid, including “protecting woman and girls” in order to be “trans allies.”

The email obtained by the Telegraph was sent in conjunction with “transgender awareness week” and cited a need to “keep scaremongering and misinformation at bay,” claiming trans hate crimes had risen 56% in one year.

HM Prison and Probation Service’s (HMPPS) diversity and inclusion team provided the contents from an official justice.gov.uk email to the outlet.

“It is important to recognize these words and phrases, understand their context and educate those you hear using them about the reasons why their use can be deemed offensive or upsetting, as people may have unknowingly used a term without being familiar with its meaning,” reads the email. “Whilst passing uses of these phrases might not be considered misconduct, the importance of challenging their use cannot be overstated.”

Staff at the Ministry of Justice (MoJ) have been told they should not use the terms “gender critical” and “protecting women and girls” in order to be trans allies, The Telegraph can disclose https://t.co/iGjhaJYhJB

The email continued: “Doing so reduces hostility, intimidation and degradation within the workplace, and encourages all whom we work with such as colleagues and service users, to treat others with decency and respect.”

A list of terms to avoid was provided with the title, “recognizing transphobic coded language” and claimed the 35 phrases were “turning what would be considered overt discrimination into covert behavior.”

Included on the list was the term “gender critical,” which the email describes as “[referring] to campaigners who believe biological sex is binary and immutable.”

“Adult human female” was flagged as “[manipulating] people into supporting bigotry while creating hostility towards trans people and their allies.”

“Protecting women’s spaces/protecting women and girls” was also referred to as “[relying] on equating trans woman with being predatory men, to play on unfounded fears and convince people that supporting trans inclusion threatens their safety.”

“When I first read the attachment in the email, I could not quite believe it – the worst thing was that I was unable to raise it safely at work for fear of being labelled a transphobe,” one MOJ employee told the Telegraph. “It came across as very aggressive and antagonistic towards anyone who believes in biological reality. I feel upset and powerless.”

“Nonsense like this undermines decent progress on creating a genuinely fair and respectful environment in prisons,” said a second employee.

“It is chilling that an official MoJ staff group email is telling civil servants to view ordinary language as transphobic,” said executive director of the UK-based not-for-profit organization Sex Matters Maya Forstater told the outlet. “This is likely to lead to harassment and bullying of anyone who challenges gender-ideology-brd policies in prisons and the justice system.”

“It is telling staff that any critical thinking in regards to this ideology is offensive,” Forstater continued. “This both creates a hostile environment for staff who don’t buy into gender ideology, and makes it impossible for them to speak clearly and honestly about prisoners, when undertaking risk assessments, and to protect prisoners”

Other terms listed include “sex is real/immutable,” which the email refuted as “rigidly binary as there are many variations [of sex].”

“Transwoman” was referred to as an attempt to “other” by removing the space between adjective and noun thus “placing them in a separate category as a whole separate noun.”

“Same-sex attracted” was defined by the email as “coded term refusing to recognize trans women as women and trans men as men” aiming to “cause division among the LGBT+ community, by claiming attraction is solely [based] on genitalia.” 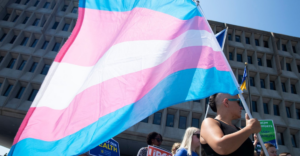