A ban on same-sex marriage in Bermuda was upheld by a British appeals court.

The judicial committee of the privy council (JCPC) is the final appellate court for Carribian islands that belong to the British commonwealth. The council has been asked to rule on the legality of same-sex marriage law in Bermuda and Cayman Island after challenges brought both by government entities, citizens, and a same-sex couple.

The JCPC of the United Kingdom upheld Bermuda’s ban on March 14.

The island’s ban had been previously ruled unconstitutional by Bermuda’s supreme court after the government’s Domestic Partnership Act of 2018 was challenged by six people, including a gay Bermudian living in Boston, and an LGBTQ charity called OUTBermuda, per The Guardian.

The DPA defines marriage as a union between a man and a woman.

Bermuda’s attorney general then appealed to the JCPC and the case was heard on Feb. 3 and 4.

In a 4-1 ruling, the JCPC said “international instruments and other countries’ constitutions may be used to read into the [Bermudian] Constitution a right to the legal recognition of same-sex marriage.”

“No restriction is placed on the worship, teaching, practice and observance of the respondents which manifests their belief in the validity of same-sex marriage,” wrote Lorde Hodge and Lady Arden. “The protection of a ‘practice’ does not extend to a requirement that the state give legal recognition to a marriage celebrated in accordance with that practice.”

Because the island’s constitution does not confer any “right to marry” and because of the government’s defined obligation to personal creed, the JCPC upheld the Bermudian attorney general’s request to uphold the ban on same-sex marriage.

“The Board will humbly advise Her Majesty that the Attorney General’s appeal should be allowed and the cross-appeal by the respondents should be dismissed,” the ruling concluded.

The board did acknowledge “the historical background of the stigmatisation, denigration and victimisation of gay people which has motivated a drive to right a wrong through the recognition by society of a relationship of love and commitment between gay people.”

In a separate case, the JCPC unanimously ruled that the Cayman Islands’ constitution does not ensure same-sex couples the right to marriage.

In 2018, a lesbian couple, Chantelle Day and Vickie Bodden Bush, were denied a marriage license by the islands’ government.

Their case was later overturned in March of 2019 after the Cayman Grand Court ruled the denial had violated the law. An appeals court later overturned that decision after ruling the constitution did not legally uphold same-sex marriage.

The appeals court did compel the government to give the women a legal status that was the equivalent of marriage. The couple then sought a ruling from the JCPC after they said the government allegedly failed to comply with the court’s ruling to grant their status. The case was heard on Feb. 23 and 24.

After the JCPC March 14 ruling, Day and Bush’s attorney Leonardo Raznovich expressed his dissatisfaction and said he would seek to challenge the JCPC’s decision.

“I’m in shock,” Raznovich told AP News. “The decision is an affront to human dignity.”

In the Cayman Island decision, the same five judges ruled the Bill of Rights specifies the right to “freely to marry a person of the opposite sex” and that “this language has been used to emphasize the limited ambit of the right and to ensure that it could not be read as capable of covering same-sex marriage.”

“The Board takes this opportunity to reiterate the point made by the Court of Appeal, that the interpretation to be given to the Bill of Rights as explained in this judgment does not prevent the Legislative Assembly from introducing legislation to recognise same-sex marriage,” the decision said in its conclusion. 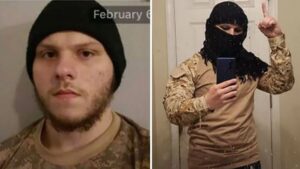 Seattle Man Pleads Guilty to Swearing Oath to ISIS, Trying to Travel to the Middle East to Commit Acts of Terrorism