Two People Shot Outside the Home of Congressman Lee Zeldin

'Like so many New Yorkers, crime has literally made its way to our front door,' said the Republican

Congressman Lee Zeldin confirmed two people had been shot outside his Long Island home while his twin daughters were inside.

“Thank you to everyone who reached out expressing concern regarding the shooting outside my home this afternoon around 2:18pm,” the congressman and Republican gubernatorial candidate in a statement on Oct. 9.

Mikayla and Arianna, Zeldin’s 16-year-old twin daughters, were inside the home when the incident occurred while the congressman and his wife, Diana, were returning from the Bronx Columbus Day Parade. After hearing the shots, his daughters locked themselves in an upstairs bathroom and called the police.

“They acted swiftly and smartly every step of the way and Diana and I are extremely proud of them,” Zeldin said. He added they were “shaken, but ok.”

“The two individuals who were shot were laying down under my front porch and the bushes in front of our porch,” he continued. “My understanding is that they have been transported to area hospitals. I do not know their identities.”

Zeldin said he was supplying the security footage from his house to law enforcement in an effort to assist with their investigation.

“Like so many New Yorkers, crime has literally made its way to our front door,” the congressman said.

Addressing the state’s crime rate has been a key tenant of Zeldin’s campaign.

Zeldin himself was assaulted while speaking at a campaign event near Rochester in July. The congressman correctly predicted his attacker, David Jakubonis, would be released by the following day. Jackubonis climbed on stage caring a sharp, self-defense keychain and reached for Zeldin. Both men fell to the ground in the ensuing struggle. Jakubonis has been charged with felony assault.

“I’m as resolute as ever to do my part to make New York safe again,” Zeldin said hours after the attack.

Data from the Federal Bureau of Investigation found New York had the 10th-highest murder rate in 2018 among any state in the nation. It also recorded the 11th-lowest rate of imprisonment.

As of Oct. 10, Suffolk County police had not publicly identified the people shot in front of Zeldin’s home and had not said if an arrest had been made in connection with the incident. 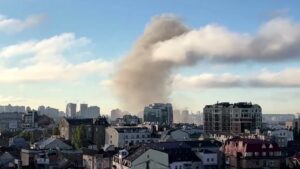