Russian President Vladimir Putin has fired missiles that hit at least 10 Ukranian cities in what he says were revenge strikes for an Oct. 8 attack against a Crimean bridge Russia used to supply its troops fighting in Ukraine.

Fireballs engulfed buildings as Russian missile strikes ordered by Putin hit civilian targets, including downtown Kiev were at least eight people were killed and 24 others injured, the Associated Press reported.

“If terrorist attacks on our territory continue, Russia’s response will be tough,” Putin said in a televised address.

The Russian president also said his nation was not allowed to participate in the investigation into the Nord Stream pipeline explosion, “but we all know who the final beneficiary [of] this crime is.”

Among the buildings hit during Moscow’s strike was the German consulate. German Defense Minister Christine Lambrecht said that the building has been vacant since the war in Ukraine started and that Germany will now supply Ukraine with air defense systems — one within days, three others next year.

“The renewed missile fire on Kyiv and the many other cities show how important it is to supply Ukraine with air defence systems quickly,” Lambrecht said. “Russia’s attacks with missiles and drones terrorise the civilian population in particular. That is why we are now providing support especially with air defence weapons.”

Following the attack, China’s Ministry of Foreign Affairs says it has spoken with all parties in an effort to mediate de-escalation.

Ukrainian President Volodymyr Zelensky responded to the attacks on Telegram, stating, “Today, the whole world once again saw the true face of a terrorist state that is killing our people. Not only on the battlefield, but also in peaceful cities.”

After the attack, Russia’s Defense Ministry said the strike had “achieved its goal” and that “all targets have been hit.”

Two Ukrainian intelligence officers were captured in the Andreevka area by Russian forces, according to Russian military website Top War. Moscow is purportedly planning to release videos of the interrogation of the two officers “soon.” 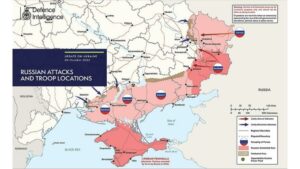 Is The Ukraine-Russia Conflict Over Lithium Oxide?