Two Indianapolis police officers were stabbed during a random attack on Wednesday, according to law enforcement leaders in the city.

The two Indianapolis Metropolitan Police Department officers had responded to a call at approximately 1:15 a.m.

“After arriving, officers came into contact with an adult male who reported another individual was harassing him. Officers told the male they would attempt to locate the person involved. The officers turned, began walking away to continue the investigation, and were stabbed by the male complainant. The male was armed with multiple knives which have been recovered at the scene,” the Indianapolis Metropolitan Police Department said in a statement about the incident.

Both officers fired at the suspect, striking him. There is body camera footage of the incident, but it has not been released by time of publishing.

“Officers provided the suspect with medical attention. Indianapolis Emergency Medical Service (IEMS) responded to the scene and transported the suspect to Methodist Hospital and was most recently listed in stable condition,” the statement said.

The officers are currently in stable condition at Eskenazi Hospital.

#BREAKING: Two officers are recovering here after being stabbed by a suspect. One was stabbed in the neck and the other in the chest. We’re told one just got out of surgery and might be here a few day. The other could be released today. pic.twitter.com/DItVix2MYA

IMPD Asst. Chief Chris Bailey has hailed the officer’s actions as “heroic” after viewing the body camera footage, according to a report from Fox 59.

“We are lucky to have women and men who are willing to put themselves between us and evil every single day. It is a tough job. It’s tougher now than it’s ever been, and I am so proud and honored to wear the same uniform as these brave officers that we saw here tonight.”

Timcast has reached out to Sergeant Michael Duke, the detective assigned to this case, to ask if they believe this was a deliberate ambush or targeting police specifically. We will update this story if more information is provided. 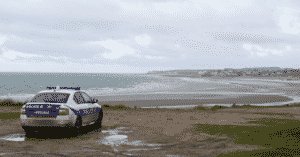