The repeal was sponsored by Indiana Republican Sen. Mike Braun, and it needed a simple majority of 51 votes to be approved by the Senate.

The final vote was 52-48. Moderate Democratic Sens. Joe Manchin of West Virginia and Jon Tester of Montana joined Republicans to vote in favor of the repeal, ultimately turning on the President.

Republicans brought the repeal to the Senate floor under the “Congressional Review Act,” which allows Congress to review presidential executive orders. Braun said the mandate was an example of the “heavy hand of government” harming businesses.

“It’s got Main Street America scared,” Braun said prior to tonight’s vote. “They’re worried about, well, what does this mean on other issues? Anybody who thinks this is a good idea, imagine the next time it happens when you’re on the wrong side on whatever the merits of the case would be.”

The Biden administration’s mandate requires private corporations with 100 or more employees to ensure their employees are vaccinated against COVID-19. Employees may alternatively undergo regular testing. Firms that do not comply face steep fines from federal agencies such as OSHA as a result.

The majority of GOP lawmakers argue the mandate is too broad and constitutes federal overreach. Business groups who oppose the mandate say it is too burdensome given the currently strained economic conditions.

Biden’s mandate for federal contractors and subcontractors was blocked by a federal judge earlier this week. 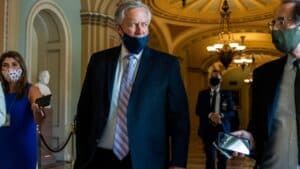 Mark Meadows is Suing Pelosi and the Jan 6 Committee