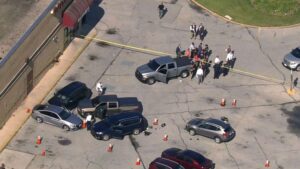 Two Baltimore Police officers who were on a US task force were shot outside the Security Square Mall in Woodlawn on Tuesday morning.

The suspect, a 32-year-old man who has not yet been identified, was fatally shot — but both of the officers are expected to recover.

The officers were part of the U.S. Marshals Capital Area Regional Fugitive Task Force, which apprehends fugitives in the Washington, D.C. and Baltimore area. Usually, their targets are suspected of violent crimes.

The officers were at the mall serving a warrant for a homicide that took place in the city on June 19, according to a statement from Baltimore Police Commissioner Michael Harrison.

“Our officers were pursuing this individual,” Police Commissioner Harrison said during a press conference. “They were doing their jobs when they were fired upon and were struck.”

“What we saw today was exactly what officers go through; these are the most dangerous situations imaginable, but they did their jobs with bravery, with courage and with professionalism,” he added.

When the officers approached his vehicle to serve the warrant, just before 8 a.m., the suspect began firing multiple rounds at them. Two officers were hit.

Several officers returned fire and the suspect. He was transported to the hospital where he died shortly after.

The officers were taken to the University of Maryland Medical Center’s shock trauma unit, where the physician-in-chief, Thomas Scalea, said that “both were seriously ill when they arrived,” according to a report from NBC News.

“We were able to get them stabilized,” he said. “Both will require some therapy. We expect both of them to survive.”

The injured officers are now “alert” and “upbeat,” Baltimore Mayor Brandon Scott said, according to a report from ABC News.

“We are aware that two @BaltimorePolice officers were shot this morning. President Mancuso & 1VP MacDonald are on the way to @shocktrauma . More information to follow as it becomes available,” the Baltimore City Fraternal Order of Police Lodge 3 tweeted following the shooting.

We are aware that two @BaltimorePolice officers were shot this morning. President Mancuso & 1VP MacDonald are on the way to @shocktrauma. More information to follow as it becomes available.

The local Baltimore firefighters union responded to the tweet wishing the officers a full and speedy recovery.

The Officers & Members of @BCFDL734 are wishing the Officers a full & healthy recovery.

NBC News noted that a deputy U.S. Marshal was also shot and wounded in Baltimore in February during an exchange of gunfire as law enforcement officials tried to arrest a man wanted for attempted murder and robbery. The suspect was fatally shot. 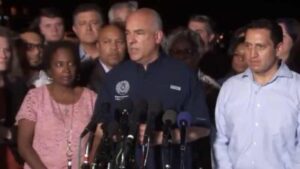