Twitter suspended a Missouri congresswoman and will not restore her account until she deletes a message the social media platform alleges violates their terms of service.

Representative Vicky Hartzler’s personal account was suspended on Feb. 28. She has said she does not plan to delete the post at the center of the controversy which has been deemed homophobic.

Hartzler, a Republican, represents Missouri’s 4th District and is currently campaigning to replace retiring Senator Roy Blunt. She has been endorsed by Missouri Senator Josh Hawley.

In February, Hartzler tweeted “Women’s sports are for women, not men pretending to be women.”

The message had previously been used in her campaign’s television ads. The ad includes the name and photo of University of Pennsylvania swimmer Lia Thomas prior to Thomas’s gender transition.

Michael Hafner, Hartzler’s campaign manager, shared the news of her suspension on March 1.

Height of stupidity reached today: @VickyHartzlerMO was BLOCKED from Twitter for saying “Women’s sports are for women.” #mosen pic.twitter.com/ILC5oADr6U

In its message, Twitter said, “You may not promote violence against, threaten, or harass other people on the basis of race, ethnicity, national origin, sexual orientation, gender, gender identity, religious affiliation, age, disability, or serious disease.”

Hartzler, who was a high school athlete and coach, said she chose to include the debate on transgender athletes in her Senate campaign because it is a “representation of the wokeness that is being inflicted upon us from all sides and has gone beyond common sense,” per AP News.

“Vladimir Putin is a murderous psychopath who invaded a sovereign nation causing death and destruction, and is currently allowed to tweet,” the statement said according to Fox News. “Yet, Twitter believes the bigger threat is a senior member of the House Armed Services Committee saying women’s sports are for women.”

The campaign also noted this was the first time the tech company had taken action against Hartzler.

Under Twitter’s rules, a suspended account can be restored within 12 hours after an offending tweet is deleted.

Hartzler was elected to the United States Congress in 2010 after serving as a State Representative. She is a House Armed Services Committee and currently serves as the Ranking Member of the Tactical Air and Land Forces Subcommittee. The congresswoman has remained active on Twitter throughout her political account. 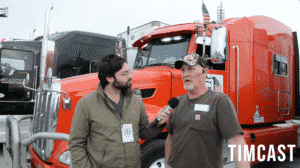 WATCH: Timcast Catches Up with People’s Convoy Truckers and Supporters in Missouri