Gabbard has extended her support for a string of “America First” Republican candidates in the last month following her departure from the Democratic party.

“I’ve met a lot of politicians who say the right things but then they cower in fear and vote the way they’re told in Washington. Mark Kelly is one of those politicians,” Gabbard said of Masters’ Democratic opponent.

“[Mark Kelly] may tell you he’s an independent thinker but in reality he’s just a rubber stamp for Joe Biden and Chuck Schumer.”

Blake Masters is the real deal. He’s seen how corrupt and power hungry the Democrat party is and he knows exactly what we’re dealing with. … Blake’s fighting for our families, to enforce our laws, and protect our children from violence, [and to] turn the economy around and fix our schools. … Blake knows we have to protect our freedoms, secure our nation, take on corruption, and rein in big tech companies who are abusing their power.

Gabbard further noted a political realignment in voters appearing to reference her departure from the Democratic Party:

We’re seeing a huge realignment in this country as American citizens wake up and realize how broken and corrupt our media and political system really are. We’re seeing a massive wave of new and first-time voters this November. We’re seeing Democrats and Independents rethinking which candidates they want to vote for.

The former Democrat concluded by urging Arizonans to vote for Masters.

“I’m supporting Blake Masters for US Senate because he’s a strong leader who’s committed to standing against warmongers in Washington, upholding the Constitution & fighting for our families & our freedom,” said Gabbard of Masters. “Make sure your voice is heard. I urge Arizonans to vote for [Blake Masters].“

I’m supporting Blake Masters for US Senate because he’s a strong leader who’s committed to standing against warmongers in Washington, upholding the Constitution & fighting for our families & our freedom. Make sure your voice is heard. I urge Arizonans to vote for @bgmasters pic.twitter.com/NZ2ySFLlzF

On Tuesday, Gabbard endorsed Republican candidates J.D. Vance, who is running for Ohio Senate, and Kristi Noem, who is seeking reelection in South Dakota’s gubernatorial election next week. In October, Gabbard threw her support behind Republican candidates Kari Lake, who is running for Arizona Governor, along with House candidates Joe Kent and Tom Barrett who are running in Washington and Michigan, respectively. Gabbard also previously endorsed Republican Senate candidates Adam Laxalt in Nevada and Don Bolduc in New Hampshire.

“I can no longer remain in today’s Democratic Party that is now under the complete control of an elitist cabal of warmongers driven by cowardly wokeness who divide us by racializing every issue & stoke anti-white racism,” announced Gabbard in an Oct. 11 episode of The Tulsi Gabbard Show. 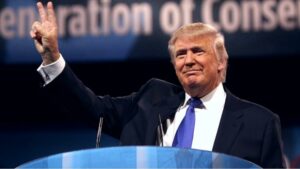 Insider Says Trump Could Announce 2024 Run Shortly After the Midterms