Insider Says Trump Could Announce 2024 Run Shortly After the Midterms

Aides to former President Donald Trump are laying the groundwork for a 2024 campaign, which could be launched shortly after next week’s midterm elections, according to the Associated Press (AP).

“I’m like 95% he’s going to run,” Reince Priebus, Trump’s former White House chief of staff, told the AP. “The real question is are other big challengers going to run? If President Trump runs, he will be very difficult for any Republican to defeat.”

People in Trump’s orbit say he is eager for a return to politics, and say a timeframe within two weeks after the midterms is a period during which he could announce another run for president, though he hasn’t firmly decided yet, the AP writes.

News of Trump firing up his team for a 2024 run comes as Democrats distance themselves from Biden and Vice President Kamala Harris as Democratic Party nominees for a second presidential run.

An op-ed in the Washington Post excoriated the heads of state, arguing Biden is often “embellishing his achievements” and delivering a scathing attack on Harris.

“Enough. She sounds, as a critic has said, like someone giving a book report on a book she has not read. Her style betrays a self-satisfied exaggeration of her aptitudes,” George Will wrote. “Lacking natural talent, she needs to prepare, but evidently doesn’t. Complacency and arrogance make a ruinous compound.”

He added, “In 2024, the Republican Party might present the nation with a presidential nominee whose unfitness has been demonstrated. After next Tuesday’s sobering election results, Democrats should resolve not to insult and imperil the nation by doing likewise.”

“I think a lot of Republicans are just tired of the drama and the fighting,” Carol Crain, 73, told the AP. “It’s really wearing. Under their breath, people say it would be nice if he could endorse somebody and go away with grace.” 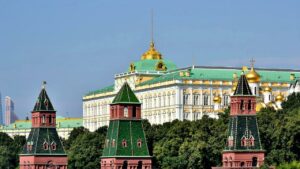