Carlson was suspended after sharing screenshots of tweets that prompted suspensions for the Babylon Bee’s account and Turning Point USA founder Charlie Kirk about Assistant Secretary for Health Rachel Levine being a biological male.

The Babylon Bee’s tweet had referred to Levine, who is transgender, as “Man of the Year” after they were named USA Today’s “Woman of the Year.”

Kirk’s suspension was prompted by a tweet pointing out that Levine “spent 54 years of his life as a man.” 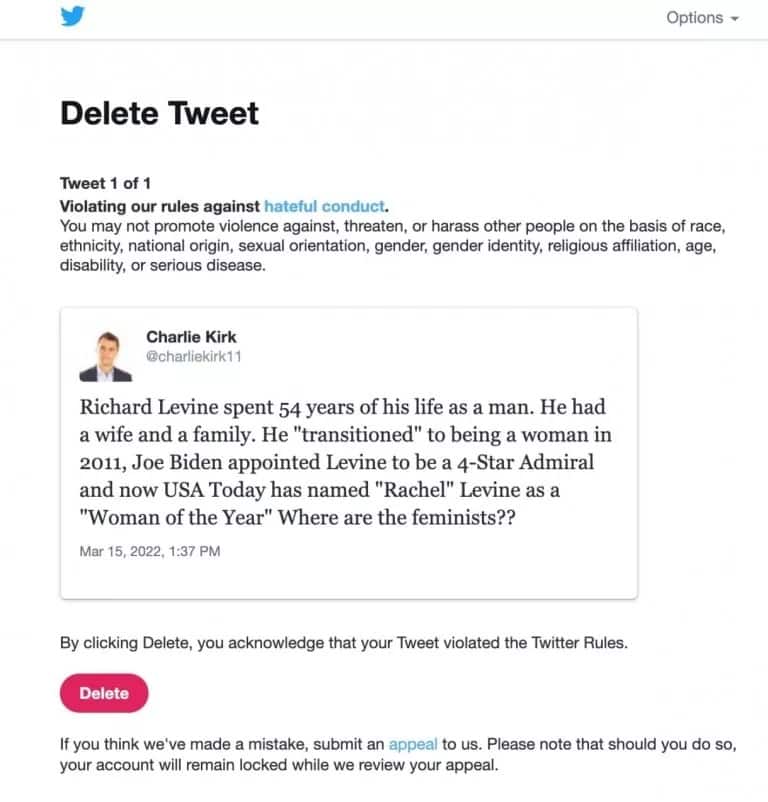 “But wait. Both these tweets are true,” the Fox News host tweeted with screenshots showing the two suspensions.

In his televised response, Carlson argued that the left uses the transgender movement as a tool for censorship.

Tucker Carlson reacts to Twitter censoring him for posting about tweets from The Babylon Bee and Charlie Kirk. pic.twitter.com/iAiQ91S4HX

“Our national conversation about transgenderism is completely defined by censorship, by making you shut up, not allowing you to notice the obvious is why they’re doing it,” Carlson said. “There’s no attempt to persuade you. There’s no fact-based argument. You can’t respond, ‘Oh, so men can become women just by wishing it. So, tell us how that works. Can I stop male pattern baldness the same way? Can I grow six inches? Please explain how this remarkable new power the trans community has discovered might apply to me. Can I do it too?'”

Carlson asserted that instead of debating you, the first move is to censor you and the second move is to punish you.

“Their first move always is censorship, and their second move, inevitably, is punishment. We learned that again last night when we were suspended from Twitter,” Carlson continued.

“‘We have determined that this account violated the Twitter rules specifically for violating our rules against hateful conduct,’ Twitter wrote to us. The only way out of Twitter jail was to delete our tweet, to pretend we never said it, to cleanse America’s conscience by just whiting out the past,” he added.

The crime, Carlson said, was pointing out a truth that has been universally acknowledged “for at least 300,000 years.”

“What was our crime, by the way? Well, we dared to highlight two accounts that Twitter has banned: Charlie Kirk and The Babylon Bee. There was nothing hateful about either one. We’d say look them up, but you can’t because they’re gone now, but both merely noted that biological sex is fixed at birth,” Carlson said. “This has been universally acknowledged by those homo sapiens for at least 300,000 years. So, it was a factual statement, but on Twitter, as in our public life, truth is no defense.”

“Yes, Lia Thomas is a proud, beautiful woman who won the swim meet because she practiced harder than the other girls,'” Carlson said. “‘Lia Thomas deserved to win. Her victory wasn’t cheating, and no, I don’t notice her bulging swimsuit. I have no idea what you’re talking about.’ That’s what they demand you say, not because they care about Lia Thomas or any other trans person, they could care less.”