Republican support for former President Donald Trump appears to have plummeted, and Florida Governor Ron DeSantis has now taken the lead in a hypothetical primary face-off.

Republican and Republican-leaning voters now prefer DeSantis to Trump by a massive 23-point margin, according to a new poll from USA Today and Suffolk University.

“By 2-1, GOP and GOP-leaning voters now say they want Trump’s policies but a different standard-bearer to carry them. While 31% want the former president to run, 61% prefer some other Republican nominee who would continue the policies Trump has pursued,” the pollsters found.

According to the poll released on Tuesday, two-thirds of the likely GOP voters want DeSantis to run.

When asked to choose between the two Republican leaders, DeSantis leads 56 percent to Trump’s 33 percent.

The pollsters found that the former president would lose in a hypothetical race between him and President Joe Biden.

“Among all voters, Trump has fallen further behind President Joe Biden in a hypothetical head-to-head rematch,” the pollsters report. “Now, Biden would win a general election matchup by 47% to 40%. (Because of the effects of rounding, Biden’s margin is a bit wider than that indicates, at 7.8 points.) In October, Biden also led but by a narrower margin, 46%-42%.”

This may be good news for Biden, but the poll still found that only 23 percent of all voters want him to run for a second term.

DeSantis, on the other hand, beat Biden in the hypothetical election match-up — 47 percent to the president’s 43 percent.

Though DeSantis appears to be the new favorite, he has not yet indicated that he intends to run. Trump is the only Republican who has formally announced his candidacy.

The pollsters also noted that while DeSantis holds a strong lead when facing only the former president, a crowded primary field may split the anti-Trump voters.

“Add in a number of other Republican presidential candidates who would divide the anti-Trump vote and you have a recipe for a repeat of the 2016 Republican caucuses and primaries,” Paleologos said, “when Trump outlasted the rest of the divided field.”

The poll of 1,000 registered voters, taken by landline and cellphone Wednesday through Sunday, has a margin of error of plus or minus 3.1 percentage points. The sample of 374 Republicans and independents who lean to the Republican Party has an error margin of 5.1 points. 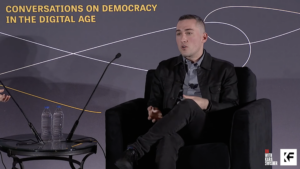