The latest in public criticism of Trump’s Businesses

The Securities and Exchange Commission is probing a potential merger between Trump Media & Technology Group and the SPAC Digital World Acquisition Corp., Digital World, it was disclosed on Monday. The SPAC is known by its stock ticker, DWAC.

The SPAC said in a public filing that it had received inquiries in recent weeks from the Securities and Exchange Commission and the Financial Industry Regulatory Authority.

Digital World said in late October it received “preliminary, fact-finding inquiries” and then an additional inquiry in early November from FINRA related to trading that preceded the Oct. 20 announcement of its merger with Trump Media & Technology Group.

SPACs, a more recent trend in the business and investment spaces, are shell companies that acquire private firms for the purpose of selling shares on stock exchanges. SPACs are essentially used as alternatives to traditional IPOs. But, they have come under growing scrutiny by regulators and lawmakers because of concerns that investors may not have enough information to understand the risks involved.

Last month, Sen. Elizabeth Warren (D-Mass.), asked the SEC to look into Trump’s SPAC merger. Warren stated in communications with SEC Chair Gary Gensler that Digital World may have violated securities rules by failing to disclose discussions it was reportedly having about merging with Trump Media & Technology Group.

Warren has been consistently pointing to a New York Times story that said the SPAC’s CEO was discussing the deal with Trump well before DWAC started trading on the Nasdaq this Fall.

Digital World and Trump Media did not respond to requests for comment. 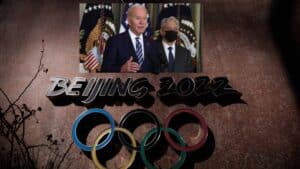