Trump Would Not Ask Pence to Run With Him Again, Says the Former VP Committed 'Political Suicide'

Former President Donald Trump would not ask his former Vice President Mike Pence to run with him again because he committed “political suicide,” according to a new book containing an interview with him where they discussed the possibility.

The comments about Pence were made during an interview for the book The Divider: Trump in the White House, by New York Times correspondent Peter Baker and The New Yorker writer Susan Glasser.

“It would be totally inappropriate,” Trump told the married couple during one of two interviews he did for the book, the Guardian reports.

The former president added that

In Pence’s own book, he says that he was “angry,” but not afraid, as protesters flooded the Capitol that day. He wrote about “how it desecrated the seat of our democracy and dishonored the patriotism of millions of our supporters, who would never do such a thing here or anywhere else.”

In May, Trump was asked about speculation that Pence may be considering a run for president in 2024 during an interview with CBN News.

When asked about his relationship with his former VP, Trump said that he had been “disappointed” by him.

Pence, and many legal experts, have maintained that he could not have sent the votes back, as his role was purely ceremonial.

“President Trump is wrong. I had no right to overturn the election,” Pence said in February while speaking at a Federalist Society event.

According to data from YouGov, Pence’s popularity rating is currently at 33 percent, while he is disliked by 44 percent. 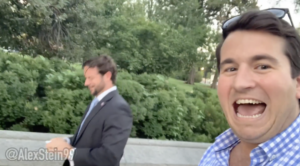 'You Lost Your Eye For Weapons Of Mass Destruction That Didn't Exist': Alex Stein Confronts Dan Crenshaw In DC