Trump: 'The Cheneys Are Diehard Globalists and Warmongers… Plunging Us Into New Conflicts For Decades'

Former President Donald Trump unloaded on Wyoming Rep. Liz Cheney and her family while speaking at a campaign rally for her primary opponent in Casper on Saturday evening.

“The Cheneys are diehard globalists and warmongers who have been plunging us into new conflicts for decades, spilling American blood and spending American treasure all over the world,” Trump asserted.

“That’s why Liz Cheney voted no on bringing our troops back home from Syria, where they didn’t even want to have us,” he continued. “Cheney is at the front of the parade trying to get us to go into wars with Russia or anyone else that wants to bite.”

“The Cheneys are die-hard globalists and warmongers who have been plunging us into new conflicts for decades.”

During the rally, Trump also displayed a meme of Cheney with the face of former President George W. Bush.

My Bush/Cheney meme displayed above the stage at the President Trump Ralley in Casper, WY 5/28/22 pic.twitter.com/PLF40os83m

President Trump shows my meme of Bush/Cheney: “I think she looks good. She looks nice.” 😂😂 pic.twitter.com/0olxur1h5K

“She’s the face of the Washington swamp and the same failed foreign policy of the Clintons, Bushes, the Obamas, the Bidens and the entire sick political establishment,” Trump said.

Cheney has been one of the most vocal critics of Trump within the Republican Party, voting to impeach him after the protest at the Capitol on January 6 and serving on the House committee investigating the protest.

The Wyoming Republican Party voted to no longer recognize Cheney as a member of the party in 2021 over her fierce opposition to Trump. On a national level, House Republicans removed her from her role as conference chair.

Cheney formally announced her reelection campaign on Thursday in a video address.

“Some things have to matter,” Cheney said in the video. “American freedom, the rule of law, our founding principles, the foundations of our republic matter. What we do in this election in Wyoming matters.”

“I’m asking for your vote because this is a fight we must win,” she continued.

A poll conducted by the Club for Growth PAC from May 24-25, 2022, found Hageman to be leading Cheney by 30 points among likely Wyoming Republican primary voters.

The Wyoming Republican primary will take place on August 16. 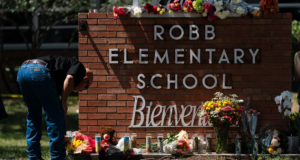