Former President Donald Trump has responded to the news that CNN president Jeff Zucker has resigned, effective immediately, after an inappropriate relationship with a colleague was uncovered during the investigation into Chris Cuomo.

Zucker, who was also the WarnerMedia News and Sports chairman, announced his resignation in a memo to CNN staff on Wednesday — and Trump issued a statement calling him a “world-class sleazebag” less than an hour later.

“Jeff Zucker, a world-class sleazebag who has headed ratings and real-news-challenged CNN for far too long, has been terminated for numerous reasons, but predominantly because CNN has lost its way with viewers and everybody else,” Trump wrote. “Now is a chance to put Fake News in the backseat because there may not be anything more important than straightening out the horrendous LameStream Media in our Country, and in the case of CNN, throughout the World. Jeff Zucker is gone—congratulations to all!”

During the investigation, Zucker was asked about his relationship with Allison Gollust, who leads marketing and communications for CNN. According to his memo, he initially lied about their involvement.

“I was required to disclose it when it began but I didn’t. I was wrong,” Zucker said in the memo, according to a report from The Hollywood Reporter. “As a result, I am resigning today.”

Gollust also admitted to the affair.

“Jeff and I have been close friends and professional partners for over 20 years,” Gollust said in a statement. “Recently, our relationship changed during COVID. I regret that we didn’t disclose it at the right time.”

WarnerMedia CEO Jason Kilar said in a memo, according to the report, that he accepted Zucker’s resignation.

Zucker had been in charge of the network since January 2013. Upon taking on the role, he hired more personalities who would share opinions and take bold stances on issues, instead of straight news reporters.

Prior to leading CNN, Zucker was the CEO of NBC and executive producer of The Today Show.

“We will be announcing an interim leadership plan shortly,” he wrote. “Both of these organizations are at the top of their respective games and are well prepared for their next chapters.”

Chris Cuomo, one of the network’s biggest stars, was fired after an investigation into his actions during the sexual harassment claims against his brother, former New York Gov. Andrew Cuomo.

Zucker and his ex-wife Caryn Zucker split up in 2018, after 21 years of marriage. The couple had met while they were both working at NBC.

It is unclear if Gollust will be remaining at the network or if she will also be resigning. 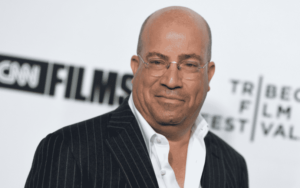