Attorneys say investigation into Trump is 'unprecedented and misguided'

Former President Donald Trump’s legal team filed a motion on Sept. 12 objecting to a request made by federal officials to stay the appointment of a special master who will review documents the FBI seized from Trump’s palatial Palm Beach, Florida, estate.

Last week, DOJ officials objected to Judge Aileen Cannon granting the request for a special master, arguing that the special master having access to classified documents would cause “immediate and serious harms to the government and the public.”

Prosecutors also told the court that the documents seized from Mar-a-Lago belong to the government, that Trump cannot assert executive privilege over them, and that he has no “possessory interest” in retaining the documents.

“This investigation of the 45th President of the United States is both unprecedented and misguided,” lawyers for Trump stated in their latest filing. “In what at its core is a document storage dispute that has spiraled out of control, the Government wrongfully seeks to criminalize the possession by the 45th President of his own Presidential and personal records.”

Trump’s legal team says the DOJ misinterpreted the court’s order as a prohibition on conducting a national security assessment.

“The Government generally points to the alleged urgent need to conduct a risk assessment of possible unauthorized disclosure of purported ‘classified records.’ But there is no indication any purported ‘classified records’ were disclosed to anyone,” Trump’s lawyers argue. “Indeed, it appears such ‘classified records,’ along with the other seized materials, were principally located in storage boxes in a locked room at Mar-a-Lago, a secure, controlled access compound utilized regularly to conduct the official business of the United States during the Trump Presidency, which to this day is monitored by the United States Secret Service.”

Since the Aug. 8 raid on Trump’s home at Mar-a-Lago, questions have been raised as to whether, once leaving office, he should have retained classified documents.

Though federal prosecutors say Trump should not be in possession of documents marked with a classification code, lawyers for the former president argue that the ultimate disposition of all “classified records” and “likely most of the seized materials” is governed exclusively by the Presidential Records Act, which allows any president broad discretion to categorize their own records as Presidential or personal records. They also state that established law limits interference from the judicial branch over what a president chooses to classify as Presidential or personal.

Trump’s legal filing also notes that even the DOJ “does not contest” that the president has “broad authority governing classification of, and access to, classified documents.”

Trump’s legal team also stated that a former president has an “unfettered right of access to his Presidential records even though he may not ‘own’ them,” citing 44 U.S.C. § 2205(3). 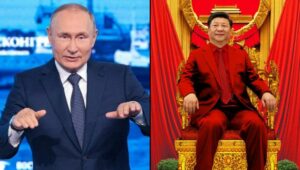