Former President Donald Trump has filed a $100 million lawsuit against the New York Times, several reporters and his niece Mary Trump for publishing his private and confidential tax records.

The lawsuit was filed on Tuesday in the New York Supreme Court.

Attorneys for Trump said that reporters Susanne Craig, David Barstow and Russell Buettner convinced his niece to “smuggle records out of her attorney’s office” and give them to the newspaper.

“The brazenness of the defendants’ actions cannot be understated,” the lawsuit said. “A group of journalists with The New York Times, in the middle of an extensive crusade to obtain Donald J. Trump’s confidential tax records, relentlessly sought out his niece, Mary L. Trump, and convinced her to smuggle the records out of her attorney’s office and turn them over to The Times.”

The lawsuit goes on to say that the reporters were aware that their actions were illegal, as evidenced by their “insistence on communicating through ‘burner’ phones” and the Times initially hiding his niece’s identity.

“The parties knew full well that their actions were wrongful, as evidenced by their insistence on communicating through ‘burner’ phones and The Times initial claims that the records were obtained from an ‘anonymous’ source. The Times attempted to capitalize on their receipt of the confidential record through their publication of various news articles; Mary L. Trump eventually followed suit and, in an ill-conceived effort to profit from these same events, published a book revealing her as the source of the unauthorized disclosure and providing a detailed account of the defendants’ wrongful conduct,” the lawsuit asserts.

In 2018, the Times had reported that Trump received approximately $413 million from his father’s fortune since he was a very young child — using information obtained from the confidential records. The Daily Caller notes that the article, which had been published in October 2018, was followed up by several other stories in the following weeks on the former president’s tax records.

The Times claims that the lawsuit is an attempt to silence news organizations.

“The Times’s coverage of Donald Trump’s taxes helped inform the public through meticulous reporting on a subject of overriding public interest,” the NYT said in a statement Tuesday evening. “This lawsuit is an attempt to silence independent news organizations and we plan to vigorously defend against it.” 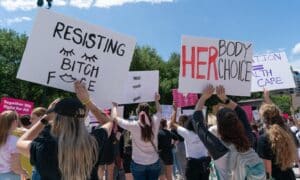