Blake Masters is the projected winner of the Arizona Republican senate primary.

In his endorsement, Trump strongly praised Masters for his tough stance on border security.

“Blake is Strong on Border Security, in particular, the disastrous Southern Border where people are pouring into the U.S. by the millions, and destroying our Country,” Trump said in an endorsement released by his Save America political-action committee. “Just two years ago, with the help of the Wall, we had the Strongest Border in the history of our Country, and now we have the weakest — Blake will turn that around quickly.

The former president also applauded Masters’ positions on crime, taxes, the military, and the Second Amendment.

“Additionally, he will Cut Taxes and Regulations, be Tough on Crime, and Support our Military and our Vets,” Trump continued. “Blake will fight for our totally under-siege Second Amendment, and WIN!”

Trump fired some serious shots at one of Masters’ opponents, Arizona Attorney General Mark Brnovich, who trailed behind in third place on Tuesday.

The former president had repeatedly claimed that the election was rigged in the state, and accused Brnovich of not supporting “clean and fair elections, or law and order.”

“Mark Brnovich is such a disappointment to me,” Trump said. “He is the current Arizona Attorney General, and while he understands what took place in the 2020 Presidential Election, and that it was Rigged and Stolen, he only views it as something he would like not to see happen again.”

President Joe Biden won Arizona in 2020, the first Democrat win a presidential election in the state since 1996.

Trump added that Masters “knows that the ‘Crime of the Century’ took place, he will expose it and also, never let it happen again.”

Masters responded by calling Trump “a great man and a visionary” who “saved this country from a Hillary Clinton regime and forever transformed American politics … and he’s not done yet.”

“It’s incredible to have his endorsement — I wish everyone could know how this feels,” Masters said in a statement following the endorsement. “Soon we will have a young, fearless, dynamic America First coalition in the U.S. Senate. And that is thanks to Donald Trump.”

Masters will now face Democrat Senator Mark Kelly in the midterm election in November. The senator took office in a 2020 special election.

The Department of Justice has said that they found no evidence of widespread fraud that could have changed the 2020 presidential election results. 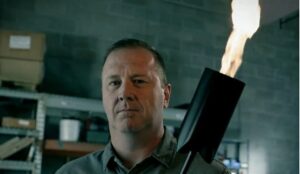