Donald Trump demanded again that Pulitzer Prizes won by the Washington Post and New York Times for investigating his presidential campaign should be stripped from the major national newspapers, claiming their reporting has since been discredited or thrown into doubt.

“These Pulitzer Prizes for totally incorrect reporting have become worthless and meaningless,” Trump said in a statement on Oct. 29.

Trump doubles down on calling for Pulitzers to be revoked from WaPost, NYT https://t.co/P1Ghpk1Xw2 pic.twitter.com/am0EAz0mzz

“The Pulitzer Board has a standing process for reviewing questions about past awards, under the guidelines of which complaints are considered by an appointed committee,” the Pulitzer Prizes told The Hill.

“No report in our package of Pulitzer-prize winning work has been challenged,” Eileen Murphy, a spokeswoman for The New York Times, said two years ago. “In fact, what we know of the Mueller report from the Attorney General’s summary confirms our coverage. Russia actively worked to upend the American elections in 2016 and there were multiple instances of Trump Transition and Administration officials having contact with Russia.”

The investigations from both newspapers focused on Donald Trump’s business, financial, and personal connection with Russian entities and individuals. Both suggested he was either compromised or working with foreign nationals to defeat Hillary Clinton in the 2016 race for the White House. 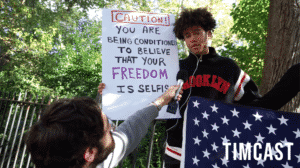