Trump Blasts McConnell for His Defense of Reps. Liz Cheney and Adam Kinzinger, Says 'He Does Not Speak For the Republican Party'

Cheney and Kinzinger have been censured by the Republican National Committee for their involvement with the House Select Committee investigating the protest on January 6, 2021.

The censure resolution said that the committee has been going after Trump supporters and allies over “legitimate political discourse,” which prompted public disagreement from McConnell, who believed that the RNC was referring to the protest itself.

“It was a violent insurrection with the purpose of trying to prevent a peaceful transfer of power after a legitimately certified election. … That’s what it was,” McConnell said on Tuesday, according to a report from The Hill.

McConnell said that he does not believe that the RNC should be singling out members with differing opinions.

“This issue is whether or not the RNC should be sort of singling out members of our party who may have different views from the majority. That’s not the job of the RNC,” he said.

Trump did not hold back in a statement responding to those remarks.

NEW Trump statement on McConnell: “Mitch McConnell does not speak for the Republican Party, and does not represent the views of the vast majority of its voters…” pic.twitter.com/hspHu1yfX1

“Mitch McConnell does not speak for the Republican Party, and does not represent the views of the vast majority of its voters. He did nothing to fight for his constituents and stop the most fraudulent election in American history,” Trump wrote.

“And he does nothing to stop the lawless Biden Administration, the invasion of our Borders, rising Inflation, Unconstitutional mandates, the persecution of political opponents, fact-finding on the incompetent Afghanistan withdrawal, the giving away our energy independence, etc., which is all because of the fraudulent election. Instead, he bails out the Radical Left and the RINOs,” he continued.

“If Mitch would have fought for the election, like the Democrats would have if in the same position, we would not be discussing any of the above today, and our Country would be STRONG and PROUD instead of weak and embarrassed, ” Trump concluded. 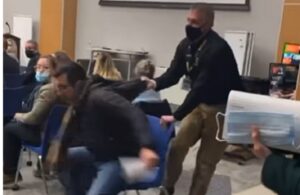