Former President Donald Trump has announced that he is launching his own social media platform called “TRUTH Social.”

Trump, who was banned from all of the major social media platforms after the protest on January 6, said that he is launching his own to “stand up to the tyranny of Big Tech.”

“I created TRUTH Social and TMTG to stand up to the tyranny of Big Tech. We live in a world where the Taliban has a huge presence on Twitter, yet your favorite American President has been silenced. This is unacceptable,” Trump said in a press release about his new endeavor.

“I am excited to send out my first TRUTH on TRUTH Social very soon. TMTG was founded with a mission to give a voice to all. I’m excited to soon begin sharing my thoughts on TRUTH Social and to fight back against Big Tech. Everyone asks me why doesn’t someone stand up to Big Tech? Well, we will be soon!” he continued.

The app appears that it will have a similar functionality to Twitter, which was Trump’s preferred social media platform before being banned. The description of the app says that users will be able to set up a profile, follow others, and receive notifications about who is engaging with your “TRUTHs.”

“Let your voice be heard. Sign up, join the conversation, and share your unique opinion by posting a TRUTH, Re-TRUTH, photo, news story, or video link to communicate with your friends, customers, and the world. Stay informed about breaking news while staying directly connected with the people who influence you – don’t be shocked if they take your TRUTH viral!” the description says.

The newly created Trump Media & Technology Group has a merger agreement with Digital World Acquisition Corp. that will allow the company to be publicly traded.

The Hill reports, “the Trump Media & Technology Group also announced plans to launch a subscription-based video service called TMTG+ that will feature “non-woke” programming. The new endeavor will be led by reality television producer Scott St. John, who has worked on shows such as ‘Deal or No Deal’ and ‘America’s Got Talent.'”

The app is currently available for pre-order on the Apple App Store and is expected to beta launch for a small group of invited users in November. The full rollout is expected in early 2022. 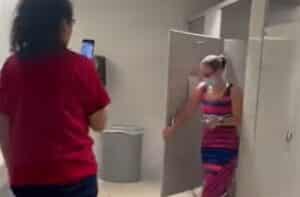