Police are recommending charges against the four immigration activists who followed Sen. Kyrsten Sinema into a bathroom at Arizona State University earlier this month.

Sinema was targeted over her refusal to support her party’s $3.5 trillion “Build Back Better Act” reconciliation bill.

The Arizona State University Police Department is asking the Maricopa County Attorney’s Office to file misdemeanor charges against the activists, according to a report from AZ Central. The activists are suspected of disorderly conduct and disruption of an educational institution.

Neither of those suggested charges relate to the Arizona law against filming someone in the bathroom.

The group, Living United for Change in Arizona, or LUCHA, had interrupted a class she was teaching on campus and followed her into a bathroom while filming the harassment.

Adam Wolfe, a spokesperson for the university’s police, said the investigation concluded this week. He did not release the names of the activists.

“I don’t want to overstep on the Maricopa County Attorney’s Office and release names, because it’s still being processed and if they choose to prosecute I don’t want to interfere with that,” he said, according to AZ Mirror.

Sinema released a statement following the incident, in which she said that their actions were not a “legitimate protest.”

“It is unacceptable for activist organizations to instruct their members to jeopardize themselves by engaging in unlawful activities such as gaining entry to closed university buildings, disrupting learning environments, and filming students in a restroom,” Sinema said.

When asked about her being repeatedly targeted for her refusal to vote along party lines, President Joe Biden said that it comes with the territory.

“I don’t think they’re appropriate tactics but it happens to everybody,” Biden said during a press conference, before laughing. “The only people it doesn’t happen to are people who have Secret Service standing around. So it’s part of the process.” 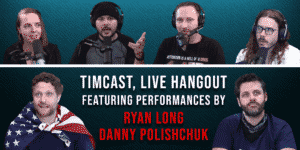 ROUND TWO: Bid Now and Win Two Tickets to Hangout With Timcast LIVE