Treasury Secretary Janet Yellen offered a hopeful outlook on the U.S. economy in an interview with 60 Minutes that aired on Dec. 11, predicting inflation easing during the course of 2023.

“So I believe inflation will be lower. I am very hopeful that the labor market will — remain quite healthy — so that people can feel good about their finances and their personal economic situation,” she told host Norah O’Donnell.

Throughout the course of the year, Americans have faced 40-year-high inflation, which has forced many to adjust their finances to cope. Yellen says she hopes that surging inflation will be short-lived.

“We learned a lotta lessons from the high inflation we experienced in the 1970s,” she said. “And we’re all aware that it’s critically important that inflation be brought under control and not become endemic to our economy. And we’re making sure that that won’t happen.”

Part of the Treasury Department’s economic optimism is based on declining shipping costs and gas prices, Yellen explained.

She also downplayed the risk of recession though many analysts have stated the U.S. is already in a recession.

“Well, economic growth is slowing substantially. And businesses see that. Look, we had a very rapid recovery from the pandemic. Economic growth was very high,” Yellen said. “And there was a surge in hiring, put people back to work. We got people back to work. We closed that gap. We have a healthy labor market. To bring down inflation and because almost everybody who wants a job has a job, growth has to slow.”

Deputy Treasury Secretary Wally Adeyemo also shed light on the role the Treasury Department is playing in the conflict with Ukraine, a key driver of higher food prices around the globe. There are more than 1,000 sanctions against Russian banking, energy, and military industries. Those sanctions are enforced by the Treasury Department, whose officials meet several times per week in secure compartmentalized information facilities (SCIFs).

Treasury officials view intelligence on attempts by Russia to evade sanctions, as well as intelligence about what Moscow needs to further the war in Ukraine.

“I won’t tell you about any intelligence that I’ve seen. But I can tell you Russia’s top tank producers have shut down their operations and they’ve made this public because they can’t get the equipment that they need,” Adeyemo said.

During the interview, when asked for how long the U.S. will provide billions of dollars to Ukraine to prop up its economy and fight Russia, Yellen replied, “for as long as it takes.” 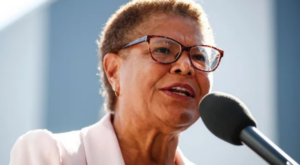