British Journalist Tommy Robinson said his car was firebombed the day after he released a trailer for his new documentary on Muslim grooming gangs.

“Your attempt to silence us won’t work,” Robinson said in a statement on Gettr. “It makes us more determined to expose you.”

The car caught fire at approximately 8 P.M. on Jan. 2 outside of the Whitehouse Hotel in Wellington. It took firefighters about an hour to control the blaze.

“The cause of the blaze has not yet been revealed,” noted the Shropshire Star in its reporting of the incident.

During a Dec. 3 livestream outside of a Police Station, Robinson notified his followers that the car involved in the arson attack was his.

“The reality is that Telford Police have Pakistani rape gangs waging war in their town – attempting to silence and attempting to stop and film that’s coming out that is going to give information on them,” Robinson said.

His new documentary titled “The Rape of Britain” comes out on Jan. 29th in the United States. It gives details, including the identity and faces, of migrant men who have been involved in the rape of young British girls in Telford.

Robinson believes the police also do not want the film to be released which has left people “in vulnerable positions.”

He added he was not aware of the incident at the time but that police officers arrived at his guarded house and stayed until 6 A.M. Robinson said they told him there had been “an incident.”

The car was taken by police for forensic examination.

“We’ve now found out that they [the alleged gang members] are trying to locate the victim in our first series, and her family,” Robinson told Timcast after meeting with local investigators.

“We know that from sources on the ground, as well as the family themselves, because they are getting told that ‘certain gang members’ are trying to find out where they’re living and they’re searching for addresses,” he said. “It doesn’t help that we know they have corrupt police officers working with them.”

This is the third time one of Robinson’s cars has been blown up.

A series of arson attacks have plagued Telford in recent weeks. On Dec. 30, two cars were set on fire, spreading to two neighboring properties. Damage was also reported in the town.

Police have denied the arson incidents were linked in any way.

“I would like to reassure the victims of these crimes and any concerned members of the community that we are thoroughly investigating each one and officers do not at this time believe the incidents to be linked,” said Cheif Inspector Helen Kinrade, per the BBC. 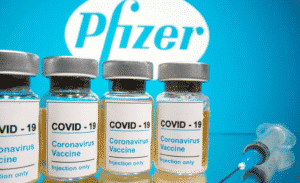 JUST IN: FDA Approves Pfizer COVID Boosters for Children as Young as 12-Years-Old