A Hong Kong activist who organized a Tiananmen Square vigil was sentenced to 15 months in prison on Tuesday.

Chow Hang-tung, 36, was the former vice chairwoman of the Hong Kong Alliance in Support of Patriotic Democratic Movements in China, which has since shuttered.

She was arrested last year, her second arrest for organizing “unauthorized” vigils.

There have normally been annual vigils in Hong Kong, but the government has banned them since the start of the pandemic. The ban has largely been ignored and crowds have continued to gather to honor the dead.

The Hill reports that “Chow was reportedly charged for making posts to social media that read ‘Lighting a candle is not a crime: Stand one’s ground,’ and authoring a newspaper article titled ‘Candlelight carries the weight of conscience and the Hong Kong people persevere in telling the truth.'”

The vigil was in honor of the pro-democracy protesters killed by the Chinese People’s Liberation Army in 1989. It is believed that there may have been thousands of people who died that day and thousands more injured, though the Chinese Communist Party has claimed that only 200 were killed.

The protesters had been camping in the square for weeks to call for things like freedom of speech and freedom of the press. On June 4, the government declared martial law, and the military moved in and opened fire. Some estimates have put the death toll as high as 10,000.

The massacre remains taboo and one of the most censored topics by the CCP. Those who bring it up are accused of questioning the government’s legitimacy.

Magistrate Amy Chan said that Chow was aiming “to encourage, persuade, make suggestions to and put pressure on members of the public,” and “amounted to inciting others to knowingly take part in an unauthorised assembly.”

Hong Kong has been cracking down on dissent, including in the press.

On Tuesday, pro-democracy Hong Kong news site Citizen News closed down after raids on other similar outlets with charges of sedition.

Citizen News announced they were shutting down on Facebook, citing deteriorating press freedoms, according to a report from the Associated Press.

“We have always loved this land, but at present, we are helpless as we are not only facing wind and rain, but tornadoes and huge waves,” the news outlet said in a statement.

“We have never forgotten our original intentions, but it is a pity that the rapid changes in society in the past two years and the deterioration of the media environment have prevented us from achieving our ideals without worry.”

Apple Daily and Stand News have also shut down their operations.

Stand News was raided and shut down on December 29. Seven people from the outlet were arrested, including two former editors that have been charged with conspiring to publish seditious materials and denied bail.

At Apple Daily, five editors and executives were arrested.

Hong Kong leader Carrie Lam claimed on Tuesday that the closures of news outlets do not mean that they no longer have press freedom.

Lam said “if they decided to cease operation out of their own concerns, I think this is nothing out of the ordinary,” adding that Hong Kong authorities do “not seek to crack down on press freedom,” according to a report from The Associated Press.

“As long as news outlets do not engage in illegal acts, they can continue to report news in Hong Kong,” Lam said Tuesday, arguing that “you cannot say that the freedom of press is eroded due to the closing of the two media outlets.”

Hong Kong’s Secretary of Justice Teresa Cheng Yeuk-wah is also taking aim at critics of the crackdown, according to a report from South China Morning Post.

“It is appalling to see that some even openly demand the immediate release of the arrested persons,” Yeuk-wah said.

“Such demands are not only a gross disrespect for the rule of law, but also are in blatant violation of international law and the basic principle of non-intervention,” she added. 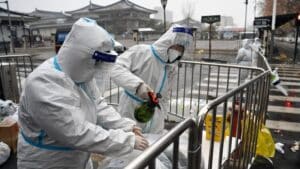