The Xi'an COVID lockdown directly impacts more than 13 million residents of one of China's biggest cities, ahead of the Winter Olympics

Thirteen million residents remain under a two-week-old lockdown, while authorities continue to say they can provide food, healthcare, and other necessities for residents.

However, citizens have described difficulties obtaining supplies and frustration with the economic impact on one of China’s largest cities.

Officials have defended the extreme measures as appropriate and necessary to stem the looming outbreak of COVID-19. China is determined to a zero COVID reality with the Beijing Winter Olympics just a month away.

The Xi’an restrictions were imposed on Dec. 23. The lockdown is among the harshest since China imposed a strict lockdown on more than 11 million people in and around the central city of Wuhan in late 2019.

The measures are part of China’s “zero COVID-19” policy, including widespread testing and mask mandates.

Xi’an has seen more than 1,600 cases in its latest surge of the Delta variant that is reportedly less infectious than the new Omicron strain.

While the numbers are far lower than the U.S. and many other countries, they show the virus’ impact even with extreme measures being taken.

The grocery program came after city authorities tightened restrictions that had allowed people to leave their homes every other day to buy necessities. Traveling to and from the city is suspended, with some exceptions and rules relaxed in districts with fewer or fewer cases.

According to state media, a third round of mass testing has also been ordered. The city claims to be capable of swabbing 10 million people in just seven hours and processing up to 3 million results in just 12 hours.

China has not reported a shortage of beds, medical equipment, or staff in Xi’an — despite other nations being overwhelmed by the pandemic response.

Athletes, officials, and journalists are soon entering the anti-pandemic region for the Olympic Winter Games and will remain within it until the Feb. 4-20 games conclude.

China is not permitting fans from outside of the country. Most spectators are expected to be from schools, government offices, and the military rather than the general public. 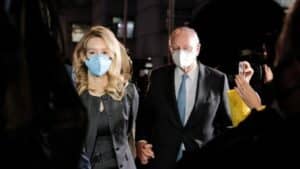