Thee Pennsylvania mothers have filed a lawsuit against the Mt. Lebanon school district, alleging that a first grade teacher was instructing her class about “gender dysphoria and transgender transitioning,” against their wishes.

The teacher involved is the mother of a “transgender child” who is the same age as her students.

The lawsuit was filed by parents Carmilla Tatel, Stacy Dunn, and Gretchen Melton. It claims that Jefferson Elementary School teacher Megan Williams and the Mt. Lebanon school board did not take their concerns about her teaching seriously and violated their rights as parents.

According to a report from the Pittsburgh Post-Gazette, the lawsuit is seeking to either prohibit the district from teaching about gender dysphoria and transgender issues or allow parents control over what their children are exposed to through existing policies. The complaint names the district, the superintendent, the school board, and Williams.

“The lawsuit alleges the district did not comply with its policies in several ways, including that it did not list gender dysphoria and transgender transitioning as part of the curriculum posted online,” the report explains. “It also allegedly did not allow for parents to excuse their children from certain instruction if it did not conform with their beliefs which, according to the lawsuit, the district had previously allowed with topics such as the Holocaust, slavery, the 9/11 terrorist attacks and Black Lives Matter, among others.”

The lawsuit says that though they believe Williams to have “unique perspectives and views” due to being the mother of a “transgender child,” that “does not give her the right to impose those views on a captive audience of six and seven-year-old children.” They maintain that their lawsuit is not “transphobic” or political, and is simply about parental rights.

On International Transgender Day of Visibility, March 31, the teacher allegedly got approval from principal Brett Bielewicz to use several books and videos from outside the school curriculum on the subject.

When one of the mothers met with Williams to discuss her concerns, the teacher told them that they would need to “agree to disagree.”

In addition to the transgender teachings, the lawsuit notes that she did not recite the Pledge of Allegiance in the classroom for the first 52 days of the school year. According to the Post-Gazette report, the principal told the parents that “the expectation of a daily Pledge of Allegiance has always been a standing practice,” but “sometimes the morning gets away from Williams.”

The teacher also allegedly disregarded parental wishes on Valentines Day, when she played a cartoon — despite a student telling her that their parents do not allow them to watch that specific program.

The lawsuit says that the teacher, and those who condoned it within the district, violated their right to “control the education of their (children)” and “to direct the upbringing and education of children under their control.”

According to a report from WTAE, the lawsuit claims that Williams has told the mothers that she “has an agenda” and intends to continue to teach “right on the edge.”

“The Mt. Lebanon School District deeply values and appreciates the close partnership we have with our families and strives to be a place where every student feels welcomed, valued, and respected. The complaint filed against the District, its Board, and employees contains various allegations that are untrue or based on partial truths that mischaracterize events for sensational effect. The District looks forward to the opportunity to set the record straight.

“Although we will not comment further on pending litigation, we refer the community to our Equity Statement: ‘The Mt. Lebanon School District is committed to providing a safe, inclusive, and welcoming school environment that recognizes and celebrates the diverse identities of all members of our school community, including students, their families, faculty, and staff. All students, regardless of background, identity, or ability will be supported to reach their full potential and pursue their unique talents. The District will provide resources in a just and equitable manner and remove barriers to allow students to thrive academically, socially, and emotionally.'” 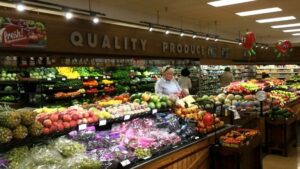 US Inflation Surges to 40 Year High