Part I: The environmentalists who warn that a 'sustainable' future might mean the end of civilization

“Your scientists were so preoccupied with whether or not they could, they didn’t stop to think if they should,” Ian Malcolm chastises the team of dinosaur-cloning scientists in 1993’s Jurassic Park. It’s one of the most iconic lines from the franchise and is readily applied to various scientific frontiers. But for our purposes here, consider the ramifications of policymakers, environmentalists, corporations, and half of the American population doing the exact opposite. What if influential men, acting on a genuine sense of urgency, felt compelled to pursue a policy measure without considering the logistical viability or mathematical constraints? What if they thought they should, but never considered if they could?

A group of leading scholars in the complex fields of systems ecology, the forefather of ecological economics, mathematicians, geologists, and even some environmentalists have been warning that Western civilization may be making such a mistake. The problem, their research explains, is that international treaties, national legislation, and regulatory decisions to combat climate change have set the developed world on a course for a future that very likely doesn’t exist.

These experts concur with climate scientists — they genuinely believe that man’s exploitation of resources may wreak havoc on our world — but as authorities in their respective disciplines, they’ve repeatedly warned that even moderate plans like President Biden’s Environmental Justice proposal face impossible logistical, mathematical, and physics-based problems. These problems don’t simply render the plans ineffective, some say, but threaten to collapse the global economy and civilization as we know it.

Naturally, this might come as some surprise — one would expect to have at least heard of these individuals and their contributions to this great undertaking. But their belief does not stem from the frantic emotions of a 16-year-old girl addressing the United Nations. They have approached their intensive research with the sober and detached comportment expected of true scholars — some have been working for decades in search of a viable solution.

That research indicates that, at best, policymakers are entirely ignorant of what the world might suffer if these policies are brought to fruition. At worst, they’re entirely aware and unable to explain to Americans that their policies might make the fever dreams of the most neurotic-sounding climate alarmist the final destination for all mankind — that automobiles, tourism, low-density rural life, and many creature comforts we all enjoy, might cease being “sustainable” in an economy mandated to achieve zero emissions.

Worst of all, the promises of a green future are always accompanied by the promise of continued economic growth — a concept antithetical to the core of sustainability. Or, as Herman Daly, the celebrated former Senior Economist in the Environment Department of the World Bank, put it, “They want to see a world of ‘win-wins’ based on articles of faith, not fact.”

Unfortunately, while some of these scholars’ earlier discoveries were utilized by clean energy policy advocates, much of their more recent work has been left discarded. That work is built upon the same foundation, but as it has yet to determine a solution of its own, it offers little value in the form of an alternative strategy to those who believe time is running out. As for those who do not accept climate change as an existential threat — let alone those who are not persuaded it is even a real phenomenon — few have likely bothered to invest their time in these academic pursuits. While conservatives busied themselves arguing the factuality of climate change, leftists easily labeled them science deniers and gained footholds in academic institutions, the media, Hollywood, corporations, whole sectors of the bureaucracy, and the majority of the citizens in every Western nation.

As it turns out, winning the debate on climate change is entirely inconsequential to achieving the desired policy agenda of American conservatives. More often than not, the argument is far less important than the public’s understanding of the solution, and the analysis of the work described below might yet save us from such folly and give ‘life’ a chance to ‘find a way.’

Energy Return on Investment: The Law of Nature

From the simplest organism to the most complex human society, one maxim must be upheld: obtain a surplus of energy. It is not enough for a creature to obtain only the amount of energy (calories) they expend in their search for sustenance; they must obtain a net surplus that sustains them until the next source becomes available. Violators of this universal law go the way of Darwin, and those that only marginally meet their goal will tarnish in stagnation.

A wolf must not only have enough energy to sustain herself for another day but also to provide for her until the next hunt, the struggle of that hunt, and, if she cares about the continued survival of her species, milk for her pups. Policymakers and environmental advocates appear to have forgotten this one simple rule.

All of this is self-evident, but Charles A. S. Hall synthesized the concept into the economic formula now known as Energy Return On Investment (EROI). The Department of Energy and the International Energy Agency uses a modified version of Hall’s formula (which he criticizes for inflating the results of renewables) termed Net Energy Assessment.

Humans could only transition from nomadic hunter-gatherers to sedentary agrarians after developing efficient hunting and animal husbandry skills that enabled investment in ventures that did not provide an immediate return of calories. The decision, whether calculated or by chance, constitutes the most persistent economic puzzle known to man — how best to allocate finite resources.

Society does not have the luxury of enjoying doctors or despising lawyers if the majority of the population is tilling the fields. In the 1850s, agriculture accounted for more than half the workforce. Today, less than 2% of the population works on a farm or ranch.

Similarly, there’s little time for art, experimentation, education, law enforcement, or the development of infrastructure. As more labor is liberated from the direct involvement in cultivation, and the less labor-intensive the cultivation process is, the greater the potential for a highly complex society to develop.

Conversely, if a society currently enjoys these things but does not maintain a net surplus of energy, the fall will be swift, merciless, and fatal for many of its members.

“We’re toilet trained to think about the human world working in terms of money,” Hall explained during a lecture at Princeton. “Money is simply a lien on energy.”

Recognizing the need for society to quantitatively and qualitatively assess the stored energy embedded in the Earth’s crust while also knowing models employing currency as the determinant factor in evaluating a resource’s usefulness to society would not cut it. He reasoned that when measured in dollars, the value of energy is subject to profoundly arbitrary and political costs. Taxation, regulations, and licenses are all subject to change from one administration to the next. Instead, he applied his background in systems ecology to develop a model that strictly dealt with tangible and real information grounded in physics: calories, joules, or watt-hours.

EROI applies the energy principles in the examples above to more complex systems such as the exploitation of finite resources or renewable sources like wind and solar. At first glance, EROI is quite simple — it’s the ratio between the number of deliverables available to the consumer and the energy required to extract, refine, and transport that energy to its end destination.

In practice, however, it’s a rather taxing endeavor to determine the EROI for a new energy source. On the one hand, many capital inputs are measured in units of currency that are not readily convertible to joules. On the other, the various inputs involved in the production of energy are far more than meets the eye.

Consider oil, for instance. Land must be assessed, equipment manufactured, test bores drilled until suitable locations and depths are determined, the ratio of water to oil determined, estimated reserves calculated, and infrastructure for transportation to the appropriate refinery must be developed.

Hall estimates that the requisite EROI for modern American society is somewhere around 14:1 and that, for an energy source to be minimally useful to society, it needs to deliver a return of at least 5:1. What would an EROI of 5:1 look like? “England in the 1500s,” Hall said without skipping a beat. 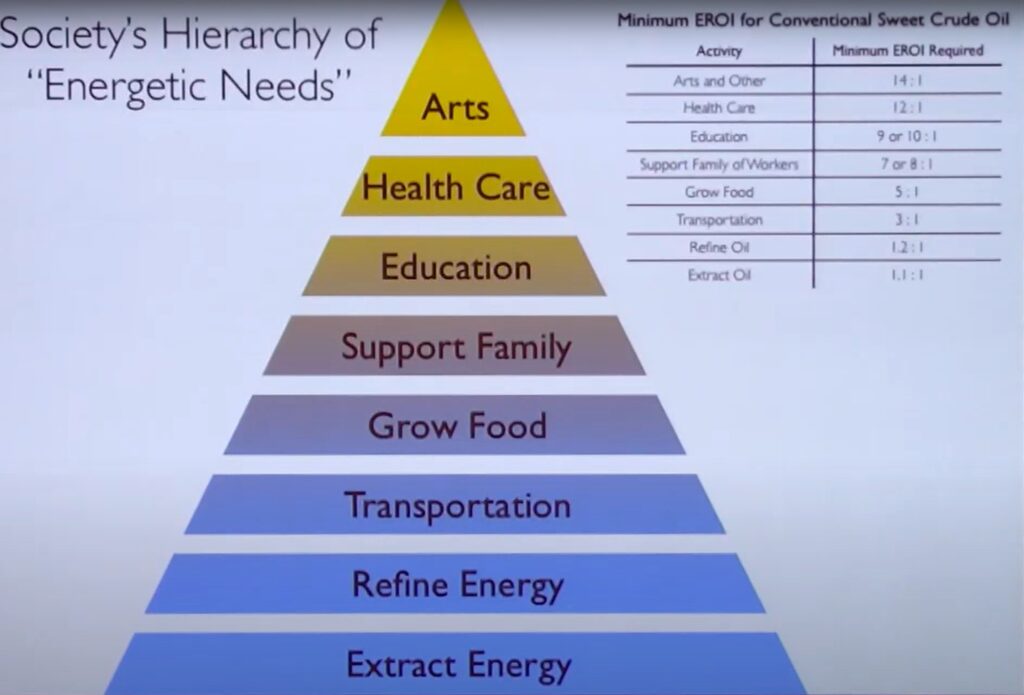 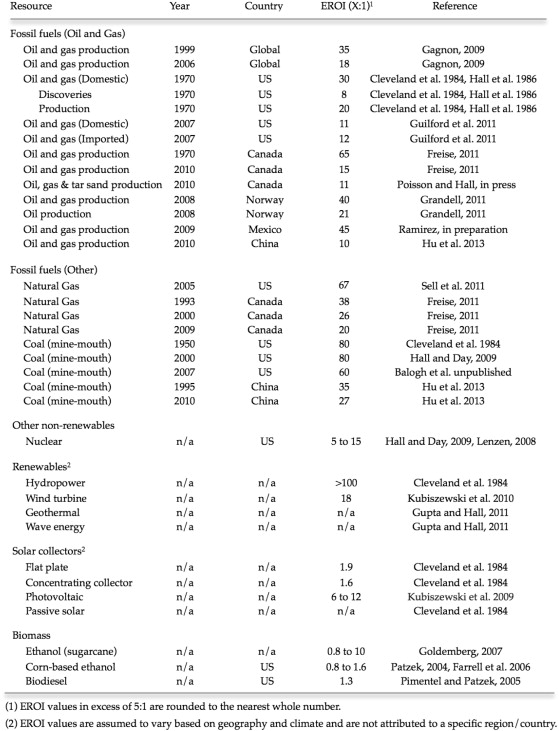 At first glance, the results for wind and solar energy are quite beneficial to society, but Hall notes that these figures do not represent the cost of intermittent downtime, storage, and infrastructural requirements. He notes that any nation planning for renewables to encompass more than 20% of their energy portfolio should expect major upfront investment and ongoing upkeep costs that could lower their return to as little as 3:1 once these hidden costs are factored in:

Wind and photovoltaic energy are touted as having substantial environmental benefits. These benefits, however, may have lower returns and larger initial carbon footprints than originally suggested (e.g. the externalities associated with the mining of neodymium and its subsequent use in wind turbine construction). The energy costs pertaining to intermittency and factors such as the oil, natural gas and coal employed in the creation, transport and implementation of wind turbines and PV panels may not be adequately represented in some cost-benefit analyses.

His conclusions are dismal:

Alternatives such as photovoltaics and wind turbines are unlikely to be nearly as cheap energetically or economically as past oil and gas when backup costs are considered. In addition there are increasing costs everywhere pertaining to potential climate changes and other pollutants. Any transition to solar energies would require massive investments of fossil fuels. Despite many claims to the contrary—from oil and gas advocates on the one hand and solar advocates on the other—we see no easy solution to these issues when EROI is considered. If any resolution to these problems is possible it is probable that it would have to come at least as much from an adjustment of society’s aspirations for increased material affluence and an increase in willingness to share as from technology.

The most moderate green energy advocates have no interest in explaining the costs of their policies to the average American. They opt instead for a fantasy of continuous growth which runs fundamentally counter to the laws of physics — our economy, they claim, can be more energetic while running on less energy. Some have suggested that the American people will save trillions or that the economic output will increase by trillions. These claims run the risk of driving the American population off of an energy cliff. As more investments are poured into green energy projects, 62% of coal mines have closed since 2008. If, as Hall’s research suggests, societies flourish through the accessibility of cheap energy and diminish through the lack thereof, the utopia promised in 2050 may instead prove to be a disaster. Speaking to that Princeton class, he warned, “I think we’re wise to try to go to renewables, but if we go to renewables, especially if you do the calculations …We’re going to have a lot less wealth.”

In Part II, we will explore what leading scientists in the United Kingdom discovered when they ran the numbers on what it would take to transform the global fleet of privately owned cars into electric vehicles. 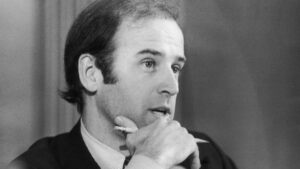