Marijuana extracts are not permitted to have more than 0.2% THC

Thailand became the first country in Asia to make the medical and industrial use of marijuana legal.

Under the new policy, law enforcement will not regulate marijuana usage or growth in private residences.

“One of the main discussions the cabinet talked about today mainly was about the way people should behave [following] the declassification of cannabis and hemp from Narcotics under Category 5 of the Narcotics Act,” said Thai Prime Minister Prayuth Chan-Ocha in a statement on June 8, per Reuters. “Starting from June 9, people can consume and smoke both cannabis and hemp, but certain behavior has to be controlled.”

Notably, public smoking is not permitted.

“Thailand’s government has warned that those eager to light up for fun that smoking in public could still be considered a nuisance, subject to a potential 3-month jail sentence and 25,000 baht ($780) fine,” reports AP News.

The government has capped the permitted level of tetrahydrocannabinol, or THC,  allowed in marijuana extracts, such as oil, at 0.2%.

Under the new policy, medical clinics can offer treatments that are infused with marijuana. Restaurants can also offer dishes made with marijuana extract provided they do not exceed the 0.2% THC limits.

“The latest step to allow more people to grow cannabis was spearheaded by tycoon-turned politician Anutin Charnvirakul, who believes that controlled legalization of marijuana can boost agriculture and tourism,” reports Bloomberg. “The deputy prime minister, who heads the health ministry, campaigned on a promise to legalize household marijuana and hemp cultivation to allow farmers to supplement their incomes.”

The island nation already supports significant medical-marijuana tourism, after the drug was legalized for medicinal purposes in 2018.

According to Forbes, the cannabis tourism industry had reached $17 billion by May of 2022.

“To date, the market has been dominated by Australia, Canada, Israel, and Thailand plans to bolster its capacity by distributing millions of plants, for free, to homes across the country,” per The Diplomat.

As part of the county’s new stance toward the drug, the public health ministry will begin distributing 1 million marijuana seedlings on June 9. 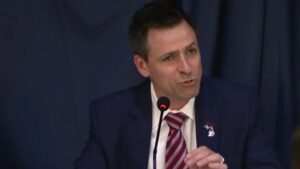