The leading Michigan Republican gubernatorial candidate has been arrested by the FBI at home in Allendale.

The candidate, Ryan Kelley, was raided on June 9 on misdemeanor charges related to the protest.

The charging documents do not accuse Kelley of ever entering the building.

Kelley is accused of “gesturing” for people to move forward while on the Capitol steps.

“At approximately 2:00 p.m., Kelley climbed onto and stood on an architectural feature next to the North West stairs and indicated by waving his hand that the crowd behind him should move towards the stairs leading into the U.S. Capitol building,” the complaint states.

“At approximately 2:20 p.m., Kelley continued to gesture to the crowd, consistently indicating that they should move towards the stairs that led to the entrance of the U.S. Capitol interior spaces,” the complaint reads, according to a report from the Detroit News.

He is also accused of “using his hands to support another rioter who is pulling a metal barricade.”

Feds: In Feb 2 interview with @wwmtnews “Kelley speaks about being at the Capitol on Jan 6, 2021 and denies having gone inside the building. KELLEY refuses to identify whether he is the individual wearing a dark coat and black baseball cap in photos shown to him by the reporter” pic.twitter.com/x0jBnOel1Q

During an interview in February, Kelley denied that he entered the building.

The complaint says that he was identified by tips and wearing the same outfit to several events.

During one event, according to the complaint, Kelley said that people should stand and fight, to prevent Democrats from stealing the election.

“He gave a speech while wearing a name tag and stated ‘Covid-19 was made so that they can use the propaganda to control your minds so that you think, if you watch the media, that Joe Biden won this election,'” the court filing continues. “‘We’re not going to buy it. We’re going to stand and fight for America, for Donald Trump. We’re not going to let the Democrats steal this election.'”

The complaint says that three witnesses familiar with Kelley helped to identify him in the footage.

In June 2021, the Michigan Democratic Party tweeted footage that they claimed showed Kelley saying, “Come on, let’s go! This is it! This is– this is war, baby!” as he walked towards the Capitol.

“Come on, let’s go! This is it! This is, this is war baby!”@kelleyforgov pic.twitter.com/IrNc3Rv10M

Kelley was slated to make his first court appearance the same day as his arrest at a federal court in Grand Rapids.

The arrest took place hours before a made-for-tv hearing from the House committee investigating January 6 is scheduled to take place.

If convicted, Kelley faces up to 10 years in federal prison.

Editor’s Note: The title of this article has been revised to better reflect the details of the story. 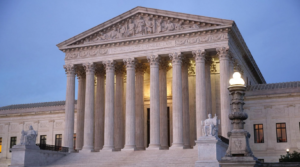