The organization behind TEXIT, the Texas Nationalist Movement, has filed a lawsuit against Facebook parent company Meta for violating the state’s new anti-censorship law.

TEXIT is the movement fighting for Texas to exit the union and become an independent, self-governing nation.

The law the organization is referencing, H.B. 20, became effective as of December 2021 and is codified as Chapter 143A of the Texas Civil Practice & Remedies Code. It states, in part, that “a social media platform may not censor a user. . . based on the viewpoint of the user or another person.”

The law forbids platforms from censoring content unless it is considered illegal under federal law or falls into certain exempted categories. It only applies to social media companies that have over 50 million monthly active users in the United States.

According to TNM, the dispute began when Facebook banned any post by the organization or supporters containing TNM’s website link TEXITnow.org as a “violation of community standards.” This action, the group said, prevented supporters from sharing TEXIT content on their Facebook pages.

Facebook has refused to lift the bans, while also refusing to specify how the TEXITnow.org link violates community standards.

TNM and the organization’s President Daniel Miller filed the lawsuit as “representatives of a class of Facebook users who were censored for posting the TEXITnow.org link, totaling roughly 185 individuals.”

“TEXIT is gaining momentum across our state and Meta is doing everything in their power to stop our movement,” said Miller in a statement provided to Timcast. “We are taking Meta to court to show that their blatant censorship and rejection of state law will not stand in Texas. Texans deserve to have their voices heard whether they support TEXIT or not.”

Paul Davis will be represent the organization. He previously won a temporary restraining order against Meta for censoring the account of former Texas gubernatorial candidate and BlazeTV host, Chad Prather.

“Paul Davis is a talented attorney who was successful in stopping Meta’s censorship of Chad Prather, we know he will be successful in overturning this injustice. Texans deserve to have the opportunity to speak freely without censorship,” Miller told Timcast. 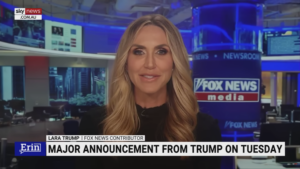 'Fully Behind Him In 2028': Lara Trump Says DeSantis Should Wait For White House Bid