'Fully Behind Him In 2028': Lara Trump Says DeSantis Should Wait For White House Bid

'There Will Be A Lot Of Opportunity For Him In The Future, And He Knows This, To Run For President'

On Sunday, Lara Trump said Florida Governor Ron DeSantis was “very smart” and has opportunity “in the future” but urged him not to run for President in 2024.

“I think that Ron DeSantis is very smart,” Trump told Molan. “Look, he’s a young guy. There will be a lot of opportunity for him in the future, and he knows this, to run for president.”

“I think he’s probably waiting to see what my father-in-law does. And I think he’s a smart enough guy to know that it would be great to have all the support of this party, of the America First, MAGA movement — whatever you want to call it — fully behind him in 2028 than possibly, you know, fracturing it in 2024.”

Fox News contributor Lara Trump says Florida Governor Ron DeSantis is “very smart” and there will be a lot of opportunity for him to run for president in the future.https://t.co/O1vSeCfFAj

“I can tell you those primaries get very messy and very raw,” she continued. “We’ve experienced that before. So wouldn’t it be nicer for [DeSantis] – and I think he knows this — to wait until 2028?”

Molan noted Lara’s response sounded like a direct message to the Florida Governor before asking if former President Trump could garner support from the Republican party for another Presidential run. Lara discussed the former President’s first primary run agains seventeen other Republican candidates who eventually came to support President Trump after securing the 2016 nomination “because they [knew] that he has what it takes not only to win the White House, but to do incredible things for this country.”

“I think the party would be behind him and I think that they know that the American people, by and large, are behind him,” Lara concluded.

“Now that the Election in Florida is over, and everything went quite well, shouldn’t it be said that in 2020, I got 1.1 Million more votes in Florida than Ron D got this year, 5.7 Million to 4.6 Million? Just asking?” Trump said on Wednesday.

Trump continued his attack on DeSantis in a Thursday post, referring to him as “DeSanctimonious” — nickname he gave the Florida Governor at a campaign rally leading up to Tuesday’s midterm, calling him an “average Republican Governor with great public relations.”

“[DeSantis] didn’t have to close up his State, but did, unlike other Republican Governors, whose overall numbers for a Republican, were just average—middle of the pack—including COVID, and who has the advantage of SUNSHINE, where people from badly run States up North would go no matter who the Governor was, just like I did!” Trump continued, claiming he was responsible for DeSantis’ successful Governorship.

“Young Kin (now that’s an interesting take. Sounds Chinese, doesn’t it?) in Virginia couldn’t have won without me,” Trump said of the Virginia Governor. “I Endorsed him, did a very big Trump Rally for him telephonically, got MAGA to Vote for him – or he couldn’t have come close to winning. But he knows that, and admits it. Besides, having a hard time with the Dems in Virginia – But he’ll get it done!”

Youngkin has been speculated as a 2024 Presidential hopeful along with DeSantis though the Virginia Governor stated in July “that’s not a decision that we have even begun to undertake.” 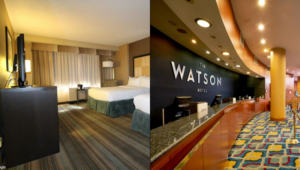