As an amendment to a motor vehicle titling and registration bill, the new policy creates a fee waiver for Class A and Class B that require registration renewals during the next 12 months.

Senate Bill 2491 was sponsored by Republican state Senator Bo Watson, who said motorcyclists and vehicle drivers in Tennessee would benefit from the direct tax break.

“The purpose behind the bill is that we have tried a lot of different strategies in this state to get money back in the hands of taxpayers,” said  Watson while on the floor. “This exceeds the amount of money that we do when we do a sales tax holiday.”

Tennesse charges $16.75 for motorcycle license fees and $23.75 for vehicles. The budget was amended to earmark $121.6 million in state revenue for the moratorium following an estimation from the Tennessee General Assembly Fiscal Review Committee.

Electric vehicles will still be subject to a $100 registration fee.

As of May, Tennessee had collected $3.4 billion more in taxes than had been budgeted for this fiscal year.

“That allowed for the surplus to be allocated to different programs or tax and fees cuts during the budget process,” reports The Center Square.

“As Americans see their cost-of-living skyrocket amid historic inflation, suspending the grocery tax is the most effective way to provide direct relief to every Tennessean,” Lee said in a press release on March 24. “Our state has the ability to put dollars back in the pockets of hardworking Tennesseans, and I thank members of the General Assembly for their continued partnership in maintaining our fiscally conservative approach.”

The proposal was included in the budget amendment for the 2022-2023 fiscal year.

Other amendment proposals include “$9.7 million in funding to cut a professional privilege tax for physicians in both osteopathic and medical disciplines,” “$11 million in one-time funding to pay vendors throughout the state who collect sales tax giving $25 per month to vendors with a maximum of $300 per month for a company with multiple stores across the state,” and “a $50 million broadband internet sales tax reduction for businesses that holds local governments harmless,” per the Tennesee Star. 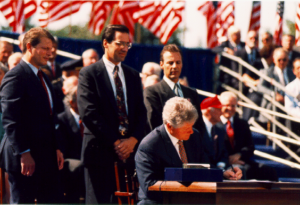