Pieper Lewis had to pay $150,000 in restitution to the family of her alleged rapist

An Iowa teen serving five years probation could spend decades in jail after she fled the probation center where she was living.

Pieper Lewis was last seen walking out of Fresh Start Women’s Center in Des Moines on Nov. 4 around 6:15 AM. A warrant for her arrest has been issued.

Her story was widely reported in September, with many denouncing the punishments levied against the now 18-year-old. Lewis pleaded guilty to involuntary manslaughter for fatally stabbing Zachary Brooks in Des Moines in 2020 when she was 15 years old. Brooks allegedly raped Lewis, who was sex-trafficked.

Polk County District Judge David M. Porter sentenced Lewis to 5 years probation and a deferred judgment. Lewis was also required to complete 1,500 hours of community service. Her record would have been expunged at the completion of the probation period. Lewis, who was 17 during the trial, was also ordered to pay $150,000 in compensation to Brooks’s family in compliance with state restitution law.

A GoFundMe, started by one of her former teachers, raised over $560,000 to cover the fine and provide the teen financial support.

At some point before she left the probation facility, Lewis removed her GPS monitor.

A probation report has requested her deferred judgment be revoked and her original sentence be reinstated. She could now face up to 20 years in prison.

The report noted that “Lewis received citations for either failing to take a direct bus route home or for getting an unapproved private ride…  Lewis had been unaccounted for a total of four hours and 16 minutes over the course of three weeks,” per the Des Moines Register.

“Lewis has said that she was trafficked against her will to Brooks for sex multiple times and stabbed him in a fit of rage,” reports AP News. “Police and prosecutors did not dispute that Lewis was sexually assaulted and trafficked.”

During the trial, prosecutors did argue that Brooks was asleep when Lewis stabbed him 30 times and that he did not pose an immediate threat to her safety. The state recommended Lewis be given probation and no jail time.

Lewis testified that she was a homeless teenager who had fled an abusive relationship with her guardian prior to the stabbing. She said she ultimately went to live with a 28-year-old she referred to as her “boyfriend” who trafficked her to other men, including Brooks, for sex in exchange for drugs and money.

“My spirit has been burned, but still glows through the flames,” said Lewis while reading a prepared statement during sentencing. “Hear me roar, see me glow, and watch me grow.”

Judge Porter warned Lewis that “the next five years of your life will be full of rules you disagree with” per NPR.

“This is the second chance that you’ve asked for,” he told the teen. “You don’t get a third.”

The Polk County Sheriff’s Office and the Des Moines Police Department have both been alerted to Lewis’s escape. Law enforcement has not released any additional information about Lewis’s escape from custody. The Brooks family has been informed about the warrant issued for her arrest. 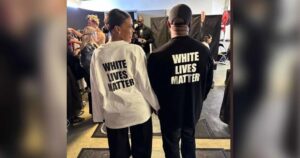