LAPD officers confronted an assault suspect with gunfire, resulting in the death of a 14-year-old girl inside a North Hollywood retail store

A 14-year-old girl was shot and killed in Los Angeles while seeking shelter in a dressing room with her mother. The incident occurred when a police officer opened fire on a man assaulting a woman in a North Hollywood clothing store.

During a news conference, Los Angeles Police Department Assistant Chief Dominic Choi told reporters one of the shots penetrated a wall and entered a dressing room where the girl was killed.

“Preliminary, we believe that round was an officer’s round,” Choi said.

“This chaotic incident resulting in the death of an innocent child is tragic and devastating for everyone involved. I have directed the release of the critical incident video by Monday, December 27th, which will include the 9-1-1 calls, radio transmissions, body worn video and any CCTV and other evidence gathered at this preliminary stage,” Los Angeles Police Chief Michel Moore said Thursday.

LAPD News: Officer Involved Shooting North Hollywood: This is preliminary info: At around 11:45am North Hollywood ofcrs responded to an Assault with a Deadly Weapon in Progress at a business on the 12100 block of Victory BLVD.

According to a timeline provided by LAPD, North Hollywood police officers responded to a call at 11:45 a.m. local time reporting an assault with a deadly weapon in progress at a business. During the same period, the LAPD said they received multiple calls stating a possible shooting in progress and that people were sheltering in place.

Upon arrival, they found a female victim bleeding and suffering from various wounds. Officers confronted the suspect a short distance away and “an officer involved shooting occurred,” the statement said.

The suspect was hit by police fire and later died at the scene.

During a search of the area, officers discovered a hole in the wall behind the suspect. Upon inspection, they found a changing room containing the deceased teen, police said.

Choi said the investigation is ongoing and authorities have yet to interview the officers and witnesses.

Investigators do not know the motive of the suspect or what type of weapon the man used in the assault of his female victim. They found a metal cable nearby they believed to be the suspect’s weapon. However, no firearm was found at the scene.

The woman who was assaulted was transported to a local hospital with head and arm injuries, police said.

At this time, the family of the 14-year-old female killed at the scene has not made any public statements. 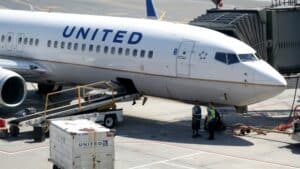 Over 100 Flights Cancelled on Christmas Eve Due to Omicron Surge